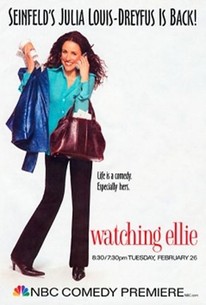 `Seinfeld' alums were 0-for-3 when Julia Louis-Dreyfus struck out as an L.A. club singer whose romantic entanglements, domestic dilemmas and performance predicaments unfolded in `real time.' Although it lasted for parts of two seasons, too few were watching Ellie, and the show folded like those of former colleagues Michael Richards and Jason Alexander.

Johnny Sanchez
as Himself

Allan Wasserman
as Producer
View All

It's a quirky little series that leans too heavily on a gimmick... Still, Louis-Dreyfus makes the routine bearable. She registers incredulity better than just about any performer.

The show could improve or it could die under the weight of artistic pretension. For anyone curious about the outcome of this bizarre science project, "Watching Ellie" bears watching.

Watching Ellie is a deceptively stylish 22-minute meditation on being a single woman. But Ellie is not the bright-eyed single gal of TV's past, nor the sassy sexually driven woman of the present. In Ellie, we have a heroine who is flawed but sympathetic.

Watching Ellie rises and falls on the ability of Louis-Dreyfus to pull laughs out of familiar story lines. Sometimes it works, sometimes it doesn't.

It's intriguing and different, but the concept is very iffy, and the view from here is that it doesn't stand a chance of succeeding.

A lovingly constructed showcase that plays to the strengths of TV's funniest, best-loved and most fictionally troubled female nut job.

The banter is zingy and saucy, but every scene recalls something done funnier and more honestly on Sex [& the City].

Everyone (me included) loves Julia Louis-Dreyfus, and it's painful to watch her knocking herself out with material that's such a dog it needs a leash to go out.