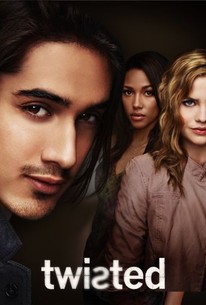 Critics Consensus: Twisted might offer below-average dialogue in terms of moody teen faire, but a compelling cast makes the grade.

Critic Consensus: Twisted might offer below-average dialogue in terms of moody teen faire, but a compelling cast makes the grade.

In the first series of this mystery, a teenager named Danny (Avan Jogia) returns to his hometown after serving time in a juvenile-detention center for murder. He tries to reconnect with his old best friends, Lacey (Kylie Bunbury) and Jo (Maddie Hasson), who have grown apart since he left town. Soon, a classmate gets murdered, and Danny becomes the prime suspect. Danny is determined to clear his name, which isn't easy—some townspeople don't even want him to attend the annual autumn festival. He tries to fit in by joining the football team and throwing a party, but one woman wants him expelled from school, and the murder investigation gets increasingly complicated.

Elaine Hendrix
as Gretchen
View All

"Twisted" is already percolating with high-school-style drama when, oops, someone turns up dead. Nothing like a still-warm corpse to put the stress of a science quiz into perspective.

Twisted seems likely to stick to superficial characterization and the conventional view of teenage life as a cold war between the popular and the unpopular.

Twisted has the potential to snare fans of teen-centric thrillers like Pretty Little Liars. But dialogue that's average at best -- coupled with a few far-from-gripping performances...make this moody mystery so-so rather than stellar.

It has a phenomenal -- honestly, phenomenal cast. Great production values...Unfortunately the writers' room is determined to kill all suspense, which is strange considering suspense is possibly the most crucial element in a weekly mystery-thriller.

I'm more interested in how shaken Jo and Lacey have become by Danny's return. The way these two girls, whose relationship disintegrated in the aftermath of their childhood trauma, have been forced back together is fascinating.

The show is pretty well written with good dialogue and interesting casting.

Despite any concerns about the mystery's long-term viability, there is enough good here to recommend sticking with Twisted to see how it develops.

There is something queasy, but also ingenious about tagging the "hero" with such a blatant past.

There are no featured audience reviews yet. Click the link below to see what others say about Twisted: Season 1!