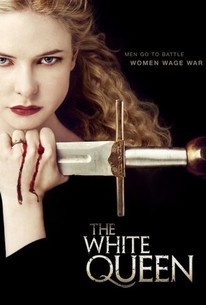 Court intrigue, murder, romance and seduction drive this historical drama about the quest of three women and those around them who will stop at nothing in their efforts to become queen of England. The series begins in 1463, as a secret wedding between widowed commoner Elizabeth Woodville (Rebecca Ferguson) and King Edward IV (Max Irons) kicks off a deadly power struggle. Believing that her son, Henry Tudor, is destined to mount the throne, and determined to see it happen, royal cousin Margaret Beaufort (Amanda Hale) begins to take manipulative steps to see her dream come true, while Anne Neville (Faye Marsay), the daughter of influential Lord Warwick (James Frain) also known as "The Kingmaker," looks on as her father schemes his way to securing the crown for her.

You could do worse than The White Queen.

If it had less magic, the miniseries might really have cast a spell.

The White Queen is gauzier than The Tudors, and it contains more overacting; but it scratches the same itch.

Its success is due largely to the costumes, set dressing, and comeliness of the two leads.

It's pretty and toothless, far lighter than its source material, and nothing like as thrilling as it should, or could, be.

As a love story set in an impossibly chivalrous past, this was deliciously enjoyable. The conflict between the houses of Lancaster and York ceased to matter -- the crucial conflict was between Innocence and Experience.

If you can brush aside concerns about historical accuracy (including a 15th century that seems a lot cleaner than you'd expect), 'The White Queen' is a rewarding experience.

The White Queen is tremendously entertaining.

Years slip by in a moment, dismissed with clunky exposition, the rooms with their hangings become interchangeable and claustrophobic, and though some windows shine brightly, it becomes increasingly difficult to see the kingdom for the queens.

Like a Masterpiece Classic on steroids, Starz's 10-part historical potboiler The White Queen is ripe with juicy intrigue of the royal and romantic variety, ripping bodices with pay-cable aplomb.

Discuss The White Queen on our TV talk forum!