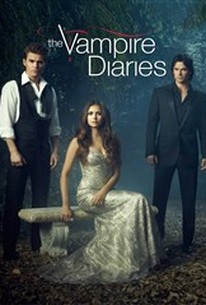 Critics Consensus: After a floundering fourth season, Vampire Diaries redeems itself with scorching twists that remind viewers that nothing is sacred.

Critic Consensus: After a floundering fourth season, Vampire Diaries redeems itself with scorching twists that remind viewers that nothing is sacred.

Season 5 of the supernatural drama, based on the novels by L.J. Smith, begins with Elena (Nina Dobrev) and Caroline (Candice Accola) moving into a dorm at nearby Whitmore College and looking forward to a normal freshman experience. Unfortunately, things quickly go sideways when their third roommate, Megan (Hayley Kiyoko), is murdered at a frat party by a vampire, and Elena learns that Megan had a connection to her late father. Meanwhile, Katherine (Dobrev) struggles adapting to being human again after 500 years as a vampire and asks Damon (Ian Somerhalder) to help her now that she is vulnerable to her many enemies. At the top of that list is Stefan's evil doppelgänger Silas (Paul Wesley), who is holding Stefan in a locked box under the sea. Katherine is also disturbed to meet a mysterious young woman named Nadia (Olga Fonda), who reveals to her a secret that dates back to 1490 Bulgaria. As for Bonnie (Kat Graham), she remains trapped on the Other Side and can only communicate with the recently resurrected Jeremy (Steven R. McQueen). But unbeknownst to them the Other Side itself is in danger of imploding.

Hayley Kiyoko
as Megan
View All

Luckily, it didn't disappoint, with a whole batch of exciting new storylines, some wonderful one-liners and serious drama.

The Vampire Diaries has a cruel way of reminding viewers that no character is safe in this world.

With its apparent complacency, willingness to coast on its love triangle and inability to make character deaths matter, it delivered Home, a season finale that single-handedly redeems the last two years with one brave, gut-wrenching sequence.

And this, my friends, is the genius of TVD. A show so fearless it makes you f-ing terrified.

I loved the way it streamlined everything in a way that was both complex yet simple.

This show certainly is pushing the content boundary levels for 8pm, network TV.

Without the Originals The Vampire Diaries hemorrhages in its fifth season, but after some false starts it eventually recovers. The story arcs follow the mythology of the doppelganger; in the first half of the season Stefan's doppelganger Silas reveals that the doppelganger lines stretch back thousands of years (created as part of a witch's curse), and he precedes to coerce the Salvatores and Elena into helping him become mortal. And in the second half of the season, a sect of witches known as Travels attempt to end the doppelganger line and undo unnatural match; which will bring an end to vampires and werewolves. Unfortunately these plots take a while to get any traction, and there are several subplots that don’t work out; like Elaine and Caroline going to college, and the Augustine Society. Still, the episodes are full of intrigue and introduce some exciting new characters. Additionally, the series crosses the 100th episode milestone this season with a powerful episode that wraps up one of the longest running story arcs of the show. Season 5 of The Vampire Diaries is a bit of a letdown, but continues to develop the characters and the mythology is interesting new ways.

Discuss The Vampire Diaries on our TV talk forum!