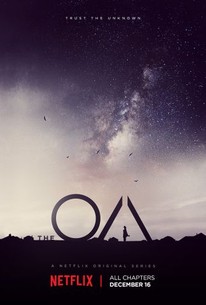 Critics Consensus: The OA is more than OK.

Critic Consensus: The OA is more than OK.

Seven years after vanishing from her home, a young woman returns with mysterious new abilities and recruits five strangers for a secret mission.

News & Interviews for The OA: Season 1

Video: Jason Isaacs on The OA Villainy, Star Trek Vs. Harry Potter Fandoms
The OA Star and Co-Creator Brit Marling Answers Our Burning Questions
15 Questions We Have After Binge-Watching The OA

View All The OA: Season 1 News

Critic Reviews for The OA: Season 1

Oh, man. If we take The OA exactly 1000 times less seriously than The OA takes itself, we might have found the best show of 2016.

What's most striking... is the richness of the story. It weaves in such a variety of textures and styles and allusions that it sometimes feels transparently absurd, but it's hard not to be drawn in given the wealth of different objects on offer.

I haven't seen anything quite like The OA, whose twists were gripping enough to keep me going even in some moments when I'd otherwise have been rolling my eyes.

The OA feels like a singular, focused effort, which gives it an addictive confidence... Such an aggressive reach... eventually leads to the story tripping over itself, but the imagination is to be admired more than the end result derided.

It is a swing and a miss on a colossal level, but oh, what a swing.

The OA showcases minority voices that are largely ignored in American media.

Though the show was slow going at first, its interesting narrative and beautiful visual tidbits kept me coming back for more.

The show seems oblivious to how daft it all looks, perhaps dazzled by its own profundity as it alludes to various half-baked pseudo-philosophical and mystical ideas.

[Brit] Marling and [Zal] Batmanglij have created an intriguing universe, populated with sympathetic and real characters. Ultimately rewarding, The OA makes you feel proud to be TV viewer.

At times it can feel like a term paper written by two honor students trying to cram in all of their esoteric research but the sense of possibility and ambition is infectious.

Audience Reviews for The OA: Season 1

Netflix gives TV shows an unprecedented opportunity never before seen, and it has led to many unique and innovative shows making it on the air. The network governs itself, without any FCC oversight, it also isn't reliant on immediate ratings, and can give unique shows the time to evolve, grow, and gain a following. This is especially important for a show like The OA, which is perhaps the most unique show I've ever seen. After missing for eight years, Prairie Johnson (Brit Martling) is finally found, only something is dramatically different. The once blind girl can now see, but that's not all, she has weird scars on her back, and seems completely out of touch with reality. Her family try to help her cope and re-integrate, but with only limited success, as Prairie seems to be obsessed with a mission that she must complete. Before she's able to do this, Prairie must recruit the help of five people and tell them her story, where she's been, how she got there, and what happened to her. As we get to know Prairie and discover why she's so weird, we also get to know the five people who will supposedly help her on her journey. All of them are unique in their own way and all of them have their own stories, which while not the main focus of the show, offer a nice interlude from the Prairie Johnson saga. The OA is a strange show which features multiple dimensions, near death experiences and experimentation, even interpretive dance. If you are not a fan of Science Fiction or desire your Sci-fi with a lot of action and strange beings, you probably aren't going to like this show too much. I found the OA to be very dark, sometimes intolerably slow, and it very frequently repeats itself. That being said it is also a incredible mystery that asks a lot of questions that some people may find hard to deal with. I found the show somewhat difficult to get into but once I did, it became very addicting. I needed to know the whole story and see what happened once the story ended. The show has been renewed for season two, but much is the case with many Netflix shows, that was a year an half ago. I really don't understand why it takes them so long to get addition seasons of their shows produced. It is very anti-climatic when you think about it, because people who got into it when it first debuted have probably forgotten all about it by now. Not to mention, how do you just start watching a show again that you haven't seen in two years? Many people are going to forget everything except the major plot lines and not wanting to re-watch the first season, aren't going to bother with season 2. With that in mind, a second season is supposedly on it's way, and hopefully it answers the biggest question of them all.

A confusing series that fails to intrigue in the entire span of the season.

Discuss The OA on our TV talk forum!