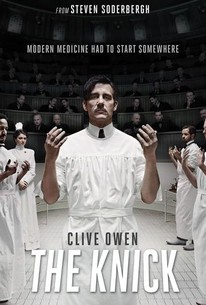 This medical drama set in the 1900s charts the exploits of the staff and patients at Knickerbocker Hospital in New York City, where they try to maintain their reputation for quality care while struggling to keep the doors open. In the first episode, accomplished but cocaine-addicted Dr. John W. Thackery (Clive Owen) is named chief surgeon and is pressured by a major benefactor to hire Dr. Algernon Edwards (Andre Holland), a black man, as his top assistant. Other principals introduced include Thackery's protege Dr. Everett Gallinger (Eric Johnson); young Dr. Bertie Chickering Jr. (Michael Angarano); Cornelia Robertson (Juliet Rylance), the well-meaning daughter of the facility's major benefactor; Lucy Elkins (Eve Hewson), neophyte nurse from the country; Tom Cleary (Chris Sullivan), a brutal, opportunistic ambulance driver; Herman Barrow (Jeremy Bobb), the underhanded, duplicitous hospital administrator; and Sister Harriet (Cara Seymour), a brash, outspoken nun who's not afraid to mix it up.

News & Interviews for The Knick: Season 1

View All The Knick: Season 1 News

Episode 1 Mr. Paris Shoes The Busy Flea Where's the Dignity? They Capture the Heat Start Calling Me Dad Get the Rope Working Late a Lot The Golden Lotus Crutchfield

Critic Reviews for The Knick: Season 1

Overall, The Knick is a sublimely addictive ride for which viewers will want to scrub up.

The Knick is an astonishing new medical drama that has the potential to be one of the year's best and most talked-about shows.

Getting into The Knick ...will take two or three episodes. But once you check into this particular TV hospital, and stick around for a while, you'll care about the characters, their stories and their amazing new inventions.

Though the series boasts fine acting, a fluent script and a star director, it's not much more involving than the average broadcast hospital drama. It's watchable but not must-watchable.

It is, as an aesthetic object, outstanding; as a medical drama, satisfying; and, as a piece of art, totally disappointing.

The Knick quickly becomes something of an outré procedural drama that remembers that well-paced storytelling is best served by consistently raw intensity.

Stylish, dark, gory and twisted, Cinemax's The Knick is exactly the show you've been waiting for, if you're the type of person who thinks Downton Abbey needs more viscera.

...Soderbergh and the production designers recreate turn of the century street scenes in painstaking detail.And perhaps that's the biggest thrill in watching The Knick: It's like travelling backward in time and landing in the middle of Central Park

The product - through Soderbergh's eye - is a sight to behold.

Audience Reviews for The Knick: Season 1

Discuss The Knick on our TV talk forum!