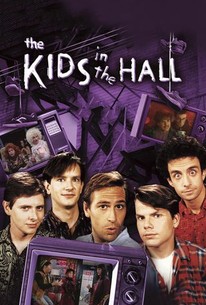 Critics Consensus: Quirky, clever, and Canadian, The Kids in the Hall's tight-knit comedy troupe elevates it above other sketch show offerings.

Critic Consensus: Quirky, clever, and Canadian, The Kids in the Hall's tight-knit comedy troupe elevates it above other sketch show offerings.

The Kids in the Hall: Season 1 Photos

One of Canada's funniest exports has a number of wonderfully odd characters who take sharp, satiric jabs at social conventions and prejudices. The show created off-the-wall cult classics such as `Cabbage Head,' `Chicken Lady,' `Head Crusher,' `The King of Empty Promises' and `Buddy Cole,' the flamboyantly gay barfly. `Saturday Night Live' creator Lorne Michaels brought the Toronto-based Kids to HBO and then to CBS, which aired both reruns and new episodes.

Critic Reviews for The Kids in the Hall: Season 1

Their original characters, their clever lines and groundbreaking themes, and their ability to play realistic women (along with their willingness to kiss each other) surely meant they would go down in comedy history.

You can say this about "The Kids in the Hall:" They are sometimes funnier than the gang over at "Saturday Night Live." Then again, that is not saying a lot these days, when the late-night "SNL" players fall flat more often than not.

The canadian sketch comedy series broke far more ground at the time, relying less on pop culture or topical impersonations and more on social anxieties revolving around subjects like sexuality, gender, faith, the workplace, and family.

The self-contained fivesome never relied on pop culture references or celebrity impressions to get a laugh. Instead they created surreal characters that seemed to inhabit some mysterious other universe.

What they have done is give Home Box Office audiences in America a dark and almost dangerous weekly comedy show, one that doesn`t play-as so such American comedy increasingly does-to the lowest common denominators.

I became addicted, not only because of the wildly nonsensical sketch humor but also because Dave Foley, Bruce McCulloch, Kevin McDonald, Mark McKinney, and Scott Thompson were a decisively cohesive unit.

Do we really need an all-male, all-white quintet of flip, hip kids, making with the jokes?

Kids In The Hall inhabited a self-contained world built around original characters and absurdist setups, linked by wraparound sketches and short films that occasionally valued weirdness over funniness.

It's the Kids' deliriously subversive take on middle-class manners and hypocrisy, and the way they fully inhabit their characters with subtle, laser-sharp acting, that set their comedy above the norm.

All five comics are clean-cut, boy-next-door types, which gives their off-the-wall humor an extra spin.

Audience Reviews for The Kids in the Hall: Season 1

Discuss The Kids in the Hall on our TV talk forum!