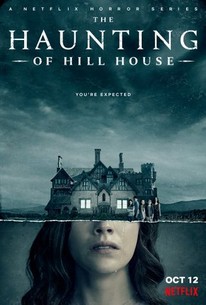 Critics Consensus: The Haunting of Hill House is an effective ghost story whose steadily mounting anticipation is just as satisfying as its chilling payoff.

Critic Consensus: The Haunting of Hill House is an effective ghost story whose steadily mounting anticipation is just as satisfying as its chilling payoff.

The Haunting of Hill House is a modern reimagining of Shirley Jackson's legendary novel of the same name, about five siblings who grew up in the most famous hauntedhouse in America. Now adults, they're reunited by the suicide of their youngest sister, which forces them to finally confront the ghosts of their own pasts... some which lurk in their minds... and some which may really be lurking in the shadows of the iconic Hill House.

Mike Flanagan’s Stuck-At-Home Binge Guide: Indie Horror Hits and Overlooked Gems
Everything We Know About The Haunting of Bly Manor
New on Netflix in August

Over 10 episodes, it's stylish, moving, and sinister, riddled with ghosts both literal and metaphorical.

It isn't the words that stick with you... It's the sight of the Bent-Neck Lady...

I found it perplexing and eventually irritating.

Its real potential lies in breaking the mold more than reapplying it. It's the people who haunt viewers more than the ghosts, and emphasizing the stories of the living is what makes Netflix's horror show come alive.

This Haunting is so far from the original source material that it's more of a demolition than adaptation.

The Haunting of Hill House contains some of the most unforgettable horror imagery in film or television in years.

Another achievement of Flanagan's vision is that the series never really feels overbearing or long - each episode is crafted to keep the audience engaged and on their toes with existential dream looming around every corner.

The Haunting of Hill House brilliantly showcased relatable characters trying their best to conquer demonstrable villainy inside the house and inside themselves.

One of horror's greatest lesbian characters can be found in The Haunting of Hill House.

The series does struggle with pacing... But with strong performances, intelligent and empathetic writing, and patient, well-crafted filmmaking, it soon becomes a powerful investigation into the lasting effects of trauma.

Whether through television or feature films, the Horror genre has been on an upward trajectory for years recently and if The Haunting of Hill House is anything to say about the future of the genre as a whole, I’d say the bar has been set even higher for the foreseeable future. Not being a huge Horror fan in general, I wasn’t thrilled about visiting this new Netflix show, but I’m definitely glad that I did, because it’s not only one of the best things that I’ve seen from this genre in a long time, but easily one of the best television shows I’ve seen in years. From its storytelling to every one of its well-rounded characters, here’s why I believe even non-Horror fans may end up loving this series as well. Taking place equally in the past and present, The Haunting of Hill House follows the Crain family as they deal with the fact that their childhood home has haunted them in the past, and may always haunt them for the rest of their lives. Still dealing with past events in the present, this is a show with a lot of potential and room for a lot of surprises. That’s really all I can say, due to the secrecy this show needs when recommending to others. Every episode has a shocking revelation that sent chills down my spine and left me yearning for more. I couldn’t stop watching this series. There are very few shows out there that I find addictive, but the cliffhangers and story revelations of each episode kept me on the edge of my seat. Not only is the way this story is presented unique, but the overall filmmaking of it blew me away at times. Particularly in the sixth episode, the camera is seemingly doing one continuous take throughout the majority of it, even when transitioning from past to present, and I just felt like rewinding and watching the entire sequence again (although the performances did feel like a stage play throughout this episode). The effort that went into this episode, along with every episode for that matter, deserves a standing ovation in my opinion. This isn’t a show that will terrify people for years and years, but the way the story unfolds and twists occur may just leave people frozen with goosebumps. My jaw was on the floor on multiple occasions. This cast is almost too great to really break each and every performer down, so I’ll simply state that the acting was near perfect across the board. Yes, young Luke and Nell played by Julian Hilliard and Violet McGraw felt slightly off at times, but given their age, I found myself more impressed than put-off, so it wasn’t much of a complaint. From the always great Carla Gugino to Elizabeth Reaser (who never gets enough credit), Henry Thomas to Michiel Huisman, and Kate Siegel to Oliver Jackson-Cohen, I very rarely found myself cringing when a line was delivered. This cast was very well-assembled. I didn’t brush past young KcKenna Grace or Lulu Wilson, because I feel they deserve their own conversation. I’ve seen and been impressed by their performances in the past, but they truly have an insane amount of talent for their age and will have a very bright future if they stick to this craft, which they clearly have a knack for. I can’t wait to see more of them. A cast is only as good as their director, so it should come as no surprise that Mike Flanagan knocked it out of the park. For those who have seen his work in the past, you know he is one of the best in the business for this particular genre at the moment. Having worked on the very solid Ouija: Origin of Evil and the fan favourite Netflix movie Gerald’s Game, I was automatically going to check out his next project. The way he presents each and every scene was done with care and precision. Whether or not this was a passion project of his, it truly felt like one. The attention to detail behind and in front of the camera was astonishing to me. In the end, The Haunting of Hill House tells an age-old story of a family being haunted, but it does so in a way that felt incredibly fresh. I was hooked from episode one and remained that way until the final frame of the show. I believe this season is the only season being made, which is great because it can be recommended to people as a lengthy ten-hour film. Aside from a few scenes feeling like a stage play in terms of performances, I loved every second of this show. Just when you think you may be starting to lost interest in a certain storyline, it hits you with a revelation that will have you asking more questions. I can’t recommend this one enough. Incredible storytelling all around.

Mike Flanagan has paved a very impressive film slate over the last few years and The Haunting of Hill House should be the swan song in the haunted house genre. This opus provides the intricate story of the Crain's family generation and it will leave you shocked and immensed throughout. Netflix has done it again and this Tv show shows what the medium can achieve with a strong storyteller at the helm. I would have loved to see this as a series of films but Hollywood has lost that privilage. 04/11/2018.

A masterwork of storytelling. Within the ghost story genre creator Mike Flanagan has conjured up a haunting story of family and love.

Discuss The Haunting of Hill House on our TV talk forum!