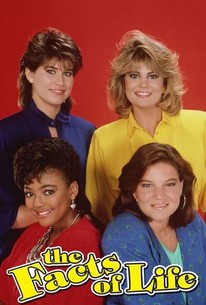 A long-running `Diff'rent Strokes' spin-off set at a girls boarding school, with the Drummond's former housekeeper, Mrs. Garrett, now a housemother. The venues for her charges' escapades moved off-campus in later years when Mrs. Garrett opened a series of eateries in town, but her core group of young women remained largely unchanged.

Richard Moll
as Himself

Critic Reviews for The Facts of Life: Season 9

The Facts of Life functions as comfort food-viewing, a show you can put on when you simply want to escape into a world in which all troubles are resolved with a few laughs and a warm, empathetic hug from the presiding den mother.

Audience Reviews for The Facts of Life: Season 9

Discuss The Facts of Life on our TV talk forum!