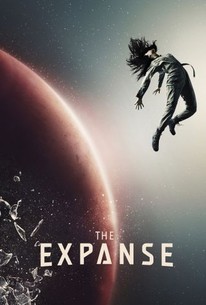 Critics Consensus: The Expanse blends sci-fi elements and detective noir into a visually compelling whole, though it takes a few episodes for the story to capture viewers' intrigue.

Critic Consensus: The Expanse blends sci-fi elements and detective noir into a visually compelling whole, though it takes a few episodes for the story to capture viewers' intrigue.

Based on the series of novels by James S.A.Corey, this space opera is set 200 years in a future where humanity has colonized the solar system, which is divided and on the brink of war. Season 1 revolves around the search for Julie Mao (Florence Faivre), the high-society daughter of one of Earth's most powerful businessmen. Having cut ties with his wealth and support, she started a new life in the Asteroid Belt, where she worked tirelessly for the betterment of the disenfranchised "belters"...right up until the day of her disappearance. Joe Miller (Thomas Jane), a hardened detective with the private security firm Star Helix, is assigned to find Julie, who he comes to believe could be the key to several mysteries. His story intertwines with that of two other characters: James Holden (Steven Strait), a rogue ship's captain involved in a planet-threatening accident; and U.N. undersecretary Chrisjen Avasarala (Shohreh Aghdashloo), who's willing to go to any lengths for what she deems is right. As these three individuals navigate the dangerous politics of Earth, Mars and a quasi-terrorist organization known as OPA, they find themselves unraveling a vast conspiracy that threatens all of humanity. Cas Anvar, Dominique Tipper, Wes Chatham and Paulo Constanzo also star.

News & Interviews for The Expanse: Season 1

View All The Expanse: Season 1 News

Critic Reviews for The Expanse: Season 1

Expanse is so expansive, it's hard to pin down - well, anything... Looks great. But what's going on?

Granted nothing here feels new or pressing, or as intense as an episode of the aforementioned Game of Thrones. But if sweeping, beautiful scenes and expansive stories that take episodes to piece together are your thing, you'll be set with The Expanse.

The Expanse has a few tricks up its sleeve. They include some nifty camera work and a deft cliffhanger that make it the... captivating.

There's a lot to get a grip on, and it might help to have read the books. If I tried to explain in full, we'd be here all day, and I couldn't do it anyway.

The Expanse is a discussion of political power and a nice shoot-'em-up actioner all at the same time.

The problem isn't with the overall look of Syfy's The Expanse. Production values are first-rate through and through. But having little or no earthly idea of what's going on can be a problem.

The little details of this universe are so finely rendered that they become stories unto themselves.

Their adventures are action-packed but their relationships with one another make every episode compelling.

The Expanse is such a wonderfully realised, affectingly believable, deceptively smart, and really damn engrossing show that it's far too easy to forget that you're watching a piece of speculative fiction.

Occasionally the storytelling becomes bogged down in information overload and some secondary characters seem to have been generated by rolling dice, but mostly The Expanse delivers an action-packed and thought-provoking first season.

Audience Reviews for The Expanse: Season 1

Poor writing muddled with bouts of atrocious acting, not to mention an overly complicated storyline... were not enough to keep me from finishing this season, in the hopes that they up their game going forward.

SyFy's The Expanse delivers an impressive first season that's full of suspense and intrigue. Based on a popular book series, the story follows a mining crew that ends up on the run after being attacked by a mysterious ship; meanwhile a police detective looks into the case of a politician's daughter who's gone missing and seems to have fallen in with a group of revolutionaries. Set in the distant future, the plot is kind of hard to follow at time and includes a lot of inside politics. However, the storytelling does a fairly good job at building mystery and at creating compelling characters. The special effects are also especially well-done, and include a number of interesting ship and tech designs. Only 10 episodes, Season 1 of The Expanse jam-packed with exciting characters and plot threats; which hopefully will be expanded upon and developed as the series continues.

Discuss The Expanse on our TV talk forum!