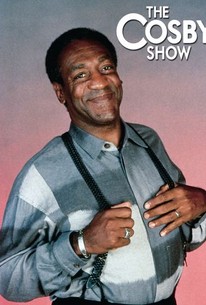 Cosby played a doctor and dad in this all-time classic, which was TV's biggest hit in the 1980s and almost single-handedly revived the sitcom genre and NBC's ratings fortunes after ABC passed on the series. Mostly set in a Brooklyn brownstone, the series focused on obstetrician Cliff Huxtable and his wife, Claire, a lawyer, as they raised their kids with loving firmness. The series debuted in September 1984, ran for eight seasons and produced one spin-off, `A Different World.'

David Smyrl
as Man in Court

Charles A. Pratt
as Runner

Lena Horne
as Herself

Pilot Good-bye, Mr. Fish Bad Dreams Is That My Boy? A Shirt Story Breaking With Tradition One More Time Play It Again, Vanessa How Ugly Is He? Bonjour, Sondra

The Cosby Show rarely came off like a revolutionary situation comedy - especially because the situations, often centered on loving-yet-sardonic parents Cliff and Clair Huxtable, seemed so ordinary.

Perhaps it was the characters' close proximity to real people; perhaps it was the skill with which Cosby was able to mix big laughs with real truth and subtle life lessons. But people identified with the Huxtables.

Unlike any other show in my long and illustrious history of television viewing, Cosby's sitcom registers at such a deep level of recognition that it doesn't merely seem like a show, but my own life.

While The Cosby Show didn't tackle race issues directly, it quietly cracked open the door to change; both the way black people are perceived by others, and how black people view themselves.

In the sentimental glow with which it is now remembered, it's easy to forget how astonishing it was that a comedy about black people could have that kind of success.

Viewers found the Huxtables--a communicative, strongly and wisely parented family that never encountered a problem it couldn't defeat in a half hour--just too good to be true.

Of all its legacies, the one most noted when discussing The Cosby Show is its depictions of race and class. Nothing like it had been seen before on television, and nothing has had its level of impact since.

The fact that swaths of the population were engaging with an African American family, every week for half an hour, was massively important for popular culture. Never mind the specifics about what this engagement was about.

For much of its eight seasons, "The Cosby Show" was foolproof happiness, and the primary source was Bill Cosby.

Twenty years on, the clothes may seem loud and hideous, but Cosby's performance remains timeless.

There are no featured audience reviews yet. Click the link below to see what others say about The Cosby Show: Season 1!

Discuss The Cosby Show on our TV talk forum!