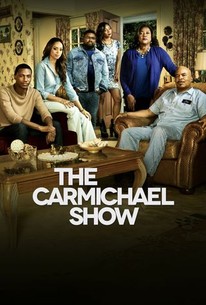 In Season 3 of "The Carmichael Show," Bobby (LilRel Howery) is inspired while helping Joe (David Alan Grier) at the Army recruitment center; Jerrod (Jerrod Carmichael) is unsure how to react after he survives a shooting incident at the mall; and Cynthia (Loretta Devine) is shocked by a revelation from her husband about his past. Meanwhile, Maxine (Amber Stevens West) educates the men about consent; the family debate casual racism after witnessing an interaction between Jerrod and one of his friends; and concerns are raised about Nekeisha's (Tiffany Haddish) drinking. Elsewhere, double standards lead Maxine and Jerrod to make a life-changing decision, but news from her family makes Jerrod realize they need to lay some ground rules.

In the end, The Carmichael Show is a rare sitcom that isn't afraid to call out its characters when they start acting like sitcom characters. And it makes for quite the conversation starter.

Uneven, but the core strength remains -- a sitcom that embraces the uncomfortable, and sometimes the unmentionable.

The Carmichael Show was really dynamic...

The show has settled into a comfortable rhythm at this point in its life cycle. The strengths of the show are they way it can open up discussions about tricky or touchy subjects.

Surprise: the show that likes to think of itself as topical presents almost exactly the same wrongheaded script in which rape is the topic for the jokes.

Even when it's preachy, the show is always engaging, and I'd recommend it to anyone who likes a sitcom with a sting.

Carmichael and his creative team are very consciously attempting to raise the ante on what they've done before. I respect that ambition even if the writers are surely leaving some easier laughs on the table in an effort to expand boundaries.

Some comedies lull you to sleep; The Carmichael Show gives you a slap, pushes your head out the door and still gives you something to laugh about.

Few sitcoms are built to handle the kind of provocative content that The Carmichael Show embraces as its reason for being... Carmichael not only keeps the jokes flying the whole time, but makes them better when it's at its most Very Special.

There are no featured audience reviews yet. Click the link below to see what others say about The Carmichael Show: Season 3!

Discuss The Carmichael Show on our TV talk forum!