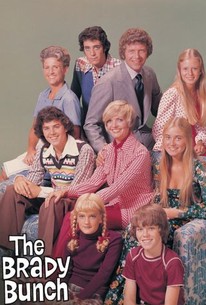 A widower with three sons marries a widow with three daughters. It's a sitcom family for the ages, with plenty of warmth and fuzziness (and constant fighting for the bathroom). The series debuted in 1969, but in many ways was a throwback to the '50s. It originally ran for five seasons on ABC, has remained popular in syndication and inspired theatrical (and TV) movies and a number of spin-offs. The series was created by Sherwood Schwartz, who also conceived `Gilligan's Island.'

Ann B. Davis
as Alice Nelson

Claudia Jennings
as Tami
View All

Oliver ruined the show's escapist factor for me, and drove me to drastic measures.

The Brady values are timeless, even if some of the hairstyles and outfits have aged badly.

Sam The Butcher is one of the great television characters of this era because he never really GETS a character... he's just a guy who works at the butcher shop.

The Brady Bunch holds up fabulously.

Discuss The Brady Bunch on our TV talk forum!