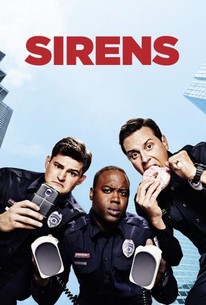 Critics Consensus: Though the characters are typical and the humor often dumb, Denis Leary's Sirens thrives on well-written scripts and likable performances.

Critic Consensus: Though the characters are typical and the humor often dumb, Denis Leary's Sirens thrives on well-written scripts and likable performances.

This comedy, loosely based on the British series of the same name, follows three Chicago EMT paramedics: Johnny (Michael Mosely); Hank (Kevin Daniels), Johnny's openly gay paramedic partner and longtime friend; and Brian (Kevin Bigley), a new paramedic recruit. In Season 1, Brian begins his job in the ambulance, Hank's fear of spiders brings out others' fears and Johnny romantically pursues Theresa (Jessica McNamee), a Chicago patrol officer. Along the way, the guys must choose between volunteering to teach kids CPR or attending a Chicago Bears game, face a married man who wants them to clear his Internet history and recall strange events for potential new recruits.

Leary's last show, Rescue Me, worked because it never lost the humanity. The task for Sirens, which will take a few weeks, is to establish it.

Unlike most men-will-be-boys comedies, it has a well-crafted script that doesn't imitate its subjects' aimlessness and low standards.

At its best is dumb fun. Johnny, Hank and rookie EMT Brian of course keep making a fine mess of things. They also mesh together pretty well in a series that bracingly is without a detracting laugh track.

Overtones of Rescue Me, absent the wit and bite.

This is a substantial show already helmed by a likable group of actors.

Despite a talented cast and Leary's comic chops, Sirens fails to reach its potential.

I may have laughed more than I have while watching any other comedy this season.

The ongoing storyline between Theresa and Johnny is one of the best elements of this fine sitcom.

The humor is very dark and very light at the same time. Which is a trademark of Leary's comedy.

There's more going on in Sirens than the vast bulk of what other cable comedies are offering and more than 50 percent of network sitcoms (where, let's not kid ourselves, the quality is actually higher than on cable).