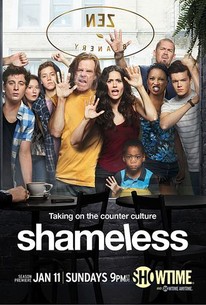 Critics Consensus: Settling into its fifth year with a irascible sense of fun, Shameless hints that the Gallaghers won't become a functional family unit anytime soon - but audiences will adore them all the same.

Critic Consensus: Settling into its fifth year with a irascible sense of fun, Shameless hints that the Gallaghers won't become a functional family unit anytime soon - but audiences will adore them all the same.

Season 5 of the misadventures of Chicago's dysfunctional Gallagher clan picks up a few months after Season 4's finale, with Fiona (Emmy Rossum) now out of prison. It doesn't take long for Fiona to get involved in a surprising love triangle. Meanwhile, Frank (William H. Macy) tries to scare off two lesbians who are trying to buy up property in the neighborhood; and he later falls in love with a dying doctor. As for Lip (Jeremy White), he commits himself to college life and becomes romantically involved with a mentor, while Ian (Cameron Monaghan) and Mickey (Noel Fisher) struggle to manage Ian's bi-polar disorder. Sammi (Emily Bergl), of course, remains a prickly thorn in everyone's side; and Carl (Ethan Cutkosky) gets in serious trouble with the law.

Milk of the Gods I'm the Liver The Two Lisas A Night to Remem...Wait, What? Rite of Passage Crazy Love Tell Me You F**king Need Me Uncle Carl Carl's First Sentencing South Side Rules

Sunday's fifth-season launch is pure Shameless -- an evisceration of all that's good and decent in the world, and fans will love just about every second.

Many of the characters haven't really evolved or learned from their mistakes. But that's kind of the point, isn't it? That's the cycle of poverty. It's cyclical for a reason, even if it doesn't fit into the happy ending formula we sometimes want.

Shameless is still flying under the radar for many viewers. But its status as one of television's most criminally underrated series could very well be what allows Shameless to flourish.

Yes, things are looking pretty dire for the Gallaghers, and we haven't even gotten to Fi's own messy love life yet.

It is also, despite being an hour each week and featuring dramatic moments - many of them heart-wrenchingly good - funnier than pretty much all of the half-hour shows Showtime tries to pass off as comedies, and it's a pleasure to have it back.

Despite the crazy scenarios and even crazier people, season five left us loving the Gallagher family more now than ever before.

Season 2 carried on the Gallagher shenanigans from the first year, but in a more pensive and sobering way.

Watching season five of what was probably this writer's favorite show at one time, has become a chore, and a dreaded one at that.

There's such a sense of contentment in the Gallagher household that it almost feels like a ticking time bomb.

This was yet another strong season introduction with the show taking on a lighter, more comedic tone than its predecessor, which fits with the summer mood.

There are no featured audience reviews yet. Click the link below to see what others say about Shameless: Season 5!