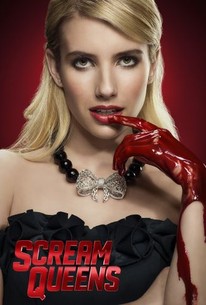 Critics Consensus: Too tasteless for mainstream viewers and too silly for horror enthusiasts, Scream Queens fails to satisfy.

Critic Consensus: Too tasteless for mainstream viewers and too silly for horror enthusiasts, Scream Queens fails to satisfy.

A series that mixes black comedy with a heavy slice of slasher flick begins on a college campus experiencing a rash of murders being committed by a killer clad in satanic garb. A premiere target for the maniac is the Kappa House sorority, which is run by Chanel (Emma Roberts), a snobby elitist who chafes at the dean's order to open up admission to a not-so-select nor special demographic of pledges. Along the way, a mysterious woman with a Kappa past is visited, the search for the killer, now called the Red Devil is mounted, and Dean Munsch (Jamie Leigh Curtis), never a proponent of the vixens of Kappa House, struggles to keep the university open. Later, the Kappas try using a Ouija board to find out who the Red Devil killer is, which actually triggers beyond-the-grave contact with a late member of the sorority who has a dire warning for her sisters. Eventually, startling confessions lead to the unmasking of the Red Devil and the identity of the killer.

As in Glee or American Horror Story, Murphy delights in misdirection and abrupt shifts of tone, both of which he does well. The dialogue is snappy and no pretension escapes un-nailed.

But Fox's Scream Queens is a nasty, trashy hybrid of Glee and American Horror Story.

Murphy gives good pilot, and this one's no exception.

It seems unlikely that Scream Queens will pull of the same trick as Scream the movie: being funny and suspenseful at the same time. Most viewers will settle for either, but the show will probably fall short at both.

Are you laughing? Then by all means, feel free to tune in. Are you not? Meet me at the bar.

It's an odd mash-up that leaves little room for real connection to the characters, having faith instead in laughs and blood. Then again, laughs and blood have a good track record.

Something starts clicking and the show finds the scary funny shocking mix it's looking for and the template is there for what should be one of fall's more entertaining shows.

It's too much of a cartoon - and not even a good one.

We're already coming back for season two, even if we have no idea where these characters could possibly go from here. It'll probably be fun to find out, though.

Gosh, it's so bad that it was sort of good. The mystery was too easy to be solved, thanks to Niecy Nash, otherwise the show would just be a disgusting feast of feminism.