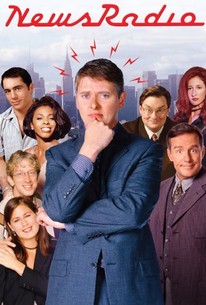 A sharp cast buoyed this underrated comedy about the staff at an all-news radio station in New York City. A midseason offering, it was moved 11 times during its four-year run, which sometimes made it difficult for viewers to find the show, and is likely why it always seemed to be on the brink of cancellation. In May 1998, actor Phil Hartman was murdered, and was replaced in the cast by Jon Lovitz, another alum of `Saturday Night Live.'

Brad Rowe
as Walt
View All

One of the things that made NewsRadio special was the presence of Dave Foley at the center... Foley was a sitcom rarity: the straight man who could be every bit as funny as the lunatics around him.

This stellar ensemble gets the most from most every moment, and the writers generally give them great, sly stuff to work with.

I attest that seasons three and four of the show are two near-flawless seasons of comedy.

NewsRadio has hit its creative stride... The result, I would argue, is the funniest show on the Peacock network.

Oh, there are still some laughs - some satisfying ones, mostly at the smaller moments, but sometimes at the big expensive gags too.