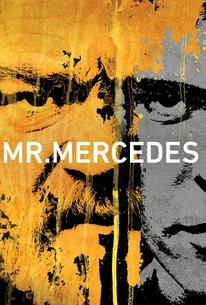 The first season of the mystery-thriller series based on a novel by Stephen King opens with a man in a clown mask driving a stolen car into a crowd, killing everyone; the crime is then investigated by Detective Bill Hodges (Brendan Gleeson). Two years later, Bill Hodges is now retired, but is still haunted by the case of "Mr. Mercedes." When the killer himself, Brady Hartsfield (Harry Treadaway), leaves a message on his answering machine taunting him, the former detective launches himself into a dangerous game of cat-and-mouse. He's helped by his neighbor, Jerome (Jharrel Jerome), and Janey (Mary-Louise Parker), the sister of the original owner of the Mercedes.

7 TV Shows You Should Binge-Watch This August
Annabelle: Creation Is a Potent Prequel
10 Things Made Terrifying in Stephen King Adaptation Mr. Mercedes

Pilot On Your Mark Cloudy, With a Chance of Mayhem Gods Who Fall The Suicide Hour People in the Rain Willow Lake From the Ashes Ice Cream, You Scream, We All Scream Jibber-Jibber Chicken Dinner

David Kelly and Stephen King have been entertaining the masses for many decades now, yet in Mr. Mercedes, they're both doing some of their best work in years.

This is an all-star crew operating at near the peak of their abilities. It makes for a tight, terrifying story of a retired cop and the madman who got away but won't go away.

Mr. Mercedes is premium-unleaded nightmare fuel right out of the gate, without even a touch of the strange or supernatural.

The drama comes off as an unappealing combination of Stephen King's most ghastly horror moments mashed into a hard-boiled detective story. It doesn't earn its violence, even with a game cast and compelling ideas.

The performances are strong throughout the show and writing is solid as well. Unfortunately, even the well-written dialogue is held back.

The genius of this series was that all of the characters, even the most minor, were so quirky and so well cast that they seemed to have lives that extended beyond their presence on screen.

I may have my quibbles about some of it, particularly in terms of the unnecessary changes, but overall, it's a pretty solid adaptation to date.

The players keep warm what could be a chilly exercise.

David E. Kelley definitely still has it, but working with some constraints - adapting a novel and/or working with a forceful director like Bender or Jean-Marc Vallée - makes it easier for him to remind us of that fact.

There are no featured audience reviews yet. Click the link below to see what others say about Mr. Mercedes: Season 1!