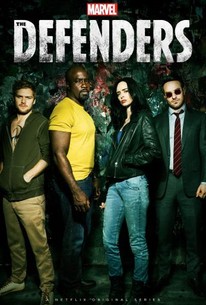 Critics Consensus: Marvel's The Defenders further develops well-known characters in an action-packed arc whose payoff packs more than enough of a punch to offset its flaws.

Critic Consensus: Marvel's The Defenders further develops well-known characters in an action-packed arc whose payoff packs more than enough of a punch to offset its flaws.

The long-awaited Defenders who fight their way onto Netflix next Friday are not your older brother's superheroes.

While it's a kick to watch these heroes trade barbs and sometimes blows, the miniseries leaves you itching for them, especially Jessica and Luke, to return to their own, somehow more expansive sandboxes.

With The Defenders, Netflix is making another very bold, very smart move.

It's Alexandra who's key to everything. Just powerful, dangerous and mysterious enough, she's the reason the Defenders can find common cause... a much-anticipated series and beloved franchise has already found an indispensable newcomer.

It's a bridge more than an artistic accomplishment in its own right. If that's enough for you, that's fine, but with all the build-up and all the hype for this superhero supergroup, no one would blame you for expecting a little more.

The Defenders themselves might shy away at the term "hero," but they're here at the exact time we need them.

We start to finally see things coming together, which should probably have happened more towards the beginning of the episode.

With any luck, the next time these heroes come together, they'll have a better villain to face and a stronger story. Despite those failings, The Defenders still delivers an enjoyable team up for these characters but it's clear it should have been better.

No, the plot is not particularly complex... but the show shines every time it shows the four heroes interacting with each other, or getting involved in martial arts fights. [Full review in Spanish]

[It] starts off slow but takes the four genres from the solo series' and slowly blends them to make a unique team dynamic we haven't seen before in the Marvel Universe.

The team-up show that everyone has been waiting the past few years for has finally arrived. Daredevil has been a show that is universally cherished for the most part, and most people seem to feel the same way about Luke Cage and Jessica Jones, but Iron Fist being the lead-up to this team-up was quite the letdown. Myself included, everyone deserved to be nervous for this new series, due to the fact that the hype was starting to die off, but that's precisely why I think I loved it so much. If you're someone who's been worried about this being a disappointment, I think you'll be pleasantly surprised. The Defenders may just be the best show that Marvel has released on Netflix for multiple reasons, and here's why. Unlike the shows that preceded it, The Defenders is a breezy eight episodes, rather than the 13 that we've grown accustomed to. This definitely worked in its favour, making for far less extended stretches of dialogue and a much quicker pace. Picking up pretty soon after the conclusion of each one of these characters final episodes, as soon as a conspiracy is started in New York, Matthew Murdoch, Luke Cage, Jessica Jones, and Danny Rand all find themselves pursuing the same clan. The Hand is a clan from the show Daredevil, and you'll find many of the plot elements from each of the respective shows flowing over. The show is solid throughout its first couple of episodes, but once the team finally begins to converse and work together, it became pure gold. We've seen Luke Cage and Jessica Jones interact throughout their respective shows, but Danny Rand and Matt Murdoch have been pretty much on their own until now. The second they all share the screen together, you'll be sold from the start. From emotional ties, to comedy, to pure awesome action, this team is well worth your time. They are all so different and eventually grow on each other, making for a emotionally satisfying conclusion to the first season. To be quite honest, just like I felt at the end of the first Avengers film, I just wish they would continue working as a team instead of going back to their own shows, because it just works so much better this way. While I don't look back on this first season and remember any glaring issues, it's not without its cliches and tropes that the Marvel brand has been known for lately. Sigourney Weaver began as a very solid villain and I was looking forward to seeing her arc grow, but she's not quite utilized enough to really make herself memorable in this universe, but that might just be me. As far as the climax goes, it's wonderfully constructed and a blast to watch, but the continuity is thrown out the window and there are quite a few clerical errors made that I just couldn't ignore. Aside from those gripes, this is a very well-constructed first season, showcasing loveable characters (yes, even in Danny Rand this time around). In the end, this first season of The Defenders feels more like an elongated film, culminating the events of everything that has come before it. There are emotionally motivational moments, empowering and well-choreographed fight sequences, along with some extremely well-written episodes, and pacing that will have you clicking onto the next episode at a very rapid rate. This season can be watched in one sitting, easily. If you have enjoyed any of these characters in their shows and have made it through the franchise thus far, then I think this series will blow your socks off in terms of entertainment in comparison. It suffers from a few classic Marvel tropes, but that's not much of a complaint. The first season of The Defenders is fantastic from start to finish.

While not as deeply grandiose as other series in its universe the Defenders packs a mean punch. The first season's stylish action, cultivating characters and drama make for a very solid intro to Marvel's new super-group of vigilantes. 4/5

An enjoyable enough way to spend a couple of hours, but I really hope this is the end of the Hand saga.

After successful first seasons of their Marvel series, Netflix brings them together for The Defenders, an action-packed superhero team-up. When Danny Rand (aka Iron Fist) tracks a secret criminal organization called the Hand to New York he teams-up with Luke Cage, Jessica Jones and Daredevil; who have all had encounters with the Hand and want to protect the city from their nefarious schemes. While it tends to focus more on Iron Fist and Daredevil, it does an impressive job at bringing in and using various characters from all four series. And, the fight scenes are incredibly exciting and intense. The performances are also pretty good; even Krysten Ritter (who's poisonous on Jessica Jones). Plus, Sigourney Weaver makes for an interesting and compelling villain as the leader of the Hand. One of Marvel's best series to-date, The Defenders shows once again what a rich and captivating cinematic universe Marvel has created.

Discuss Marvel's The Defenders on our TV talk forum!