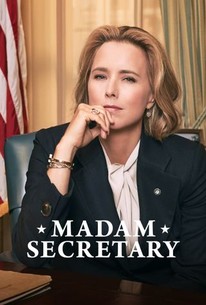 In the fifth season of this drama series, Elizabeth (Téa Leoni) and President Dalton (Keith Carradine) must face a new and dangerous threat: violent nationalists that have just attacked the White House. Plus, Elizabeth is attempting to run for president, but soon discovers the tool that the campaign can take on her and her family. Meanwhile, Henry (Tim Daly) is working at the White House as an ethics advisor, which results with him constantly disagreeing with Elizabeth. Also, Alison's (Kathrine Herzer) interest in politics keeps increasing, while Jason (Evan Roe) is actively preoccupied with his college applications.

Will Chase
as Owen Callister

Eric Stoltz
as Will Adams

Mary B. McCann
as Deedee Becker

Madeleine Albright
as Herself

Hillary Clinton
as Herself

Colin Powell
as Himself

While an Emmy may not be forthcoming, Clinton acquits herself well in this fifth-season launch of a hit that wants -- and occasionally has -- some of that ol' West Wing mojo.

Cameos from Colin Powell, Madeleine Albright and Hillary Clinton -- and a terrific guest appearance by Linda Lavin...get the fifth season of the political drama off to a strong start.

What a way to kick things off. As if having not one, not two, but three former Secretaries of State on Madam Secretary Season 5 Episode 1 wasn't enough, the cast and writers delivered a hell of a story.

There are no featured audience reviews yet. Click the link below to see what others say about Madam Secretary: Season 5!