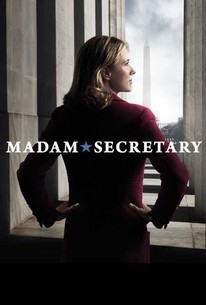 In Season 3 of "Madam Secretary," Jason's (Evan Roe) computer is hacked leading to the McCord family realizing they may have a stalker. Henry (Tim Daly) looks into Elizabeth's (Téa Leoni) past as a political science professor for answers, while attempting to rescue priceless antiquities from the terrorist organization Hizb-al Shahid and protect an undercover operative within a doomsday cult. Elsewhere, Elizabeth continues her unorthodox approach to being secretary of state and brokers multiple peace deals resulting in her being considered for a Nobel Prize. Meanwhile, Stevie (Wallis Currie-Wood) awaits her college acceptance letters while working as an intern, President Dalton (Keith Carradine) runs for re-election and Russell (Zeljko Ivanek) has a health scare.

Eric Stolz
as Will Adams

James Brown
as Himself

Tanner Flood
as Will Adams

Will Watkins
as FBI Agent

Will Cobbs
as DS Officer

In any case Madam Secretary is an entertaining series, well done, with a powerful production and a functional distribution. [Full Review in Spanish]

Thank goodness for the CBS drama, which has picked up The West Wing's mantle of believing in the best parts of American exceptionalism.

Life doesn't always offer us a happy ending, and Madam Secretary Season 3 Episode 18 didn't either. It's one of the things that makes this entire series so compelling.

With the way Election 2016 is going, it's been next to impossible for writers to come up with storylines that stranger than reality. Madam Secretary Season 3 Episode 1 certainly gave it the old college try though.

There are no featured audience reviews yet. Click the link below to see what others say about Madam Secretary: Season 3!