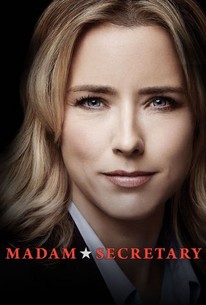 In the second-season opener, Elizabeth (Téa Leoni) takes the oath of office after President Dalton's (Keith Carradine) plane disappears over the Pacific Ocean. It seems as though a skilled hacker has found a way to override communications on Air Force One, but who does he work for and how much further will he go? When strange things start happening at the McCord house, Elizabeth and Henry (Tim Daly) grow concerned that someone is stalking her family. The Defense Intelligence Agency asks Henry to recruit one of his Russian students to work for the U.S. government, but it will take a lot of persuading to accomplish. Stevie's (Wallis Currie-Wood) relationship with the president's son continues, but she begins to question their future. Elizabeth gets on board with the president's campaign for re-election, but her political views may cost him votes. Executive Producer Morgan Freeman directs and guest stars in the first episode of the season.

Eric Stoltz
as Will Adams

Madeleine Albright
as Herself

Elan Even
as Yuri Dyachenko

Martin Bashir
as Himself

Hansel Tan
as Aide
View All

It was a rather exciting hour and set up a new mystery to be solved this season.

Madam Secretary shines more through its star, Tea Leoni, and its supporting cast, than its stories, which work harder than they probably need to to make the job of secretary of state look interesting.

Keep up the good work, Madam Secretary. You've got my vote.

Finally, these characters have developed the connections that make you wish you were a part of the team.

There are no featured audience reviews yet. Click the link below to see what others say about Madam Secretary: Season 2!