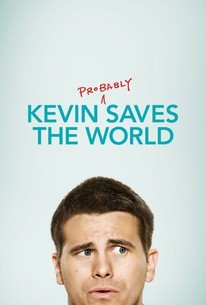 Season 1 of the drama series follows the life of Kevin (Jason Ritter), a suicide survivor, as he moves in with his sister Amy (Joanna Garcia) and her daughter Reese (Chloe East) in an attempt to put his life back together. When he meets Yvette (Kimberly Hebert Gregory), a messenger from God who tells him he's destined to save the world, Kevin decides to become a better person in order to grow his spiritual powers. He soon finds out that, of the 36 righteous souls that are born in each generation, he is the only one remaining. As he works hard at helping the people in his life, he also tries to untangle the mystery of the missing souls.

Will Sasso
as Dave

David Huynh
as Vong
View All

Whatever the potholes in the plot, Saves the World commendably aspires to be bracing and uplifting in times when a second coming of Touched By An Angel might just do a world of good.

A huggable charmer with a big heart that can't decide whether to go deep or skim the surface.

The logline for this light drama ... suggests an offbeat show with potential, but it does not work well in execution.

[Jason] Ritter and the rest of the cast are certainly likable; 'Kevin' tries to be heartfelt and somehow meaningful - but it just doesn't come together.

There's a kind of celestial vagueness over the proceedings in which, like The Good Place, there's just supposed to be a universal ethical understanding of good and bad. it comes off as half-baked theology and television drama.

The Touched by an Angel-esque setup is pretty hokey, and the show's tone is a bit scattered between sweet drama and sci-fi thriller, but ultra-charming actors put this one over.

The first episode is so sappy it belongs on pancakes - and, yes, I realize the world is hurting, but patronizingly low-grade inspirational junk like this is not the answer to anyone's problems.

It's a show that, while serious at times, also had a lot of humor. I may not have been bursting out laughing, but I had a smile on my face throughout the hour.

... the biggest obstacle that Kevin (Probably) Saves the World has to overcome is its tendency to descend into mawkishness.

Jason Ritter is so likeable in his sadness and Kevin (Probably) Saves the World so directed in its mission it might work.

There are no featured audience reviews yet. Click the link below to see what others say about Kevin (Probably) Saves the World: Season 1!