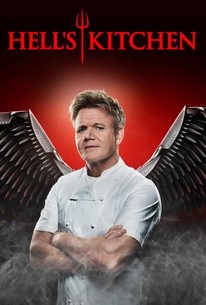 Rookies vs. Veterans A Fond Farewell Hell's Riders Hell Freezes Over Fish Out of Water Hot Potato Last Chef Standing One Hell of a Party What Happens in Vegas Poor Trev

If you can handle Ramsay's rudeness and the annoying reality-show elements...the action is nail-bitingly delicious.

There are no featured audience reviews yet. Click the link below to see what others say about Hell's Kitchen: Season 18!