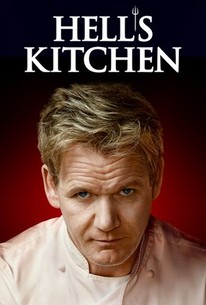 If you can't stand the heat...then don't try to cook your way to glory in this reality show. Season 1 sets the mold: Acid-tongued British chef Gordon Ramsay berates and belittles would-be culinary superstars, and eliminates them episode by episode until the winner emerges with a job at one of Ramsay's restaurants. In Episode 1, the seven male and five female contestants prepare their "signature dishes"---and get their first scoldings. Only one, a chicken Parmesan, really pleases Ramsay. Then they're given either a red or blue chef's jacket, divided into coed teams, sent to their dorms (in the building where the show is taped) and told to return in a half hour for their first "dinner service," in which they cook for diners other than Ramsay in side-by-side kitchens. The team that Ramsay decides has performed better (or, in many episodes, less badly) wins. The losing team must nominate two of its own for elimination, and Ramsay chooses who goes. Not surprisingly, the opening night's dinner service is a disaster, and in Episode 2 things get so bad that diners call out for pizza, while in Episode 3, a diner vomits after eating one contestant's risotto. Episodes begin with an early-morning wakeup call, followed by a challenge: cleaning squid, making pasta, even setting tables. Rewards for the winners range from massages and wine tastings to an appearance in a morning TV show's cooking segment. But the losers are tasked with punishments like scouring pots, polishing silverware and mopping the dorms. Slowly, things get better, and in Episode 7, when only five chefs remain, Ramsay merges the teams. By that time, he's behaving nicely---at times---and he begins to treat the contestants like protégés. But that doesn't stop one of the two finalists from messing up a risotto.

Though [Ramsay's] bleep-filled rants are supposed to bring out the best in his staff, they seem like blatant workplace harassment. When he turns his ire on the customers, it's even harder to stomach.

The real test here isn't enduring the heat; it's the stupidity.

In his role as top chef, Ramsay is mean to the point of being unlikable...But viewers who like their reality shows with a dash of nastiness may revel in just how cruel he can be.

"Hell's Kitchen" is on Fox, so the drama is more predictable and the cliches more abundant...Still, there's something enjoyable about "Hell's Kitchen." That something is mainly Ramsay.

Hell's Kitchen is a cut above the rest of the current crop of reality shows because of its unique approach and, of course, the bombastic host.

You'd think that anger would play well in this country -- we of the short fuses, drive-by shootings, post office meltdowns and parental wilding at girls soccer games. But no.

There are no featured audience reviews yet. Click the link below to see what others say about Hell's Kitchen: Season 1!