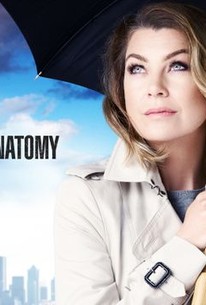 Critics Consensus: A guilty pleasure that's short on guts, Grey's Anatomy and its cast of improbably fresh-faced characters may be addictive, but lack authenticity.

Critic Consensus: A guilty pleasure that's short on guts, Grey's Anatomy and its cast of improbably fresh-faced characters may be addictive, but lack authenticity.

In the first series of this medical drama, a group of surgical interns, including Meredith Grey (Ellen Pompeo), Cristina Yang (Sandra Oh), Izzie Stevens (Katherine Heigl), George O'Malley (T. R. Knight) and Alex Karev (Justin Chambers), begin working at Seattle Grace Hospital. On the night prior to her first day, Meredith goes to a local bar and sleeps with a man she never expects to see again. The man turns out to be neurosurgeon Derek Shepherd (Patrick Dempsey), one of her new bosses. Izzie accuses Meredith of sleeping with her boss to get ahead, and as the series progresses, a complicated romance develops between Meredith and Derek.

Ever Carradine
as Athena

Nate Reese
as Father of Patient #1

A hard days night The First Cut Is the Deepest Winning a Battle, Losing the War No Man's Land Shake Your Groove Thing If Tomorrow Never Comes The Self Destruct Button Save Me Who's Zoomin' Who?

They're all bursting with life and individuality, practically popping off the screen.

Grey's Anatomy creator Shonda Rhimes pulls you into the interns' lives, and the actors keep you there.

Grey's Anatomy, ABC's new hospital drama, is the kind of TV product that's so instantly recognizable you feel like you've already dreamed it from premiere to finale.

Perhaps, like a selfless organ donor, the show will pass on the best parts of itself to another show that can really use them. And the most functional organ on Grey's Anatomy-its delightfully bilious spleen-is Sandra Oh.

The series has emerged as a quality guilty pleasure and, in its way, a fine successor to that recent Sunday night must, Sex and the City.

There's a freshness about it that may appeal to those who have tired of ER.

With a terrific musical soundtrack, a great-looking cast, and some decent romantic, humorous and poignant story lines, this familiar-looking workplace series has heart.

Okay, so the overdramatic plotlines still exist, but it's not the medicine that makes the show interesting. Rather, it's the unique characters and their ability to suck you back in every week as if they were childhood friends.

Grey's Anatomy, once it gets going, doesn't confound expectations or subvert its genre. Instead, it runs though the checklist of calamities that we've come to expect.

We've seen Oh rock qualifiedly as the hot chick in the movie Sideways, and Heigl has shown she has ready reserves of fierceness and vulnerability. Why isn't one of them playing Meredith Grey?

There are no featured audience reviews yet. Click the link below to see what others say about Grey's Anatomy: Season 1!