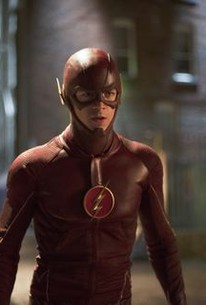 Critics Consensus: The Flash pulls off a thrilling crossover with its sibling series, Arrow, by skillfully blending the two shows' disparate tones and showcasing its dueling superheroes' complementing strengths.

Critic Consensus: The Flash pulls off a thrilling crossover with its sibling series, Arrow, by skillfully blending the two shows' disparate tones and showcasing its dueling superheroes' complementing strengths.

A crossover event that concludes on "Arrow" begins with Barry teaming with Oliver Queen to stop a meta-human who is using his ability to control people's emotions to rob banks. Meanwhile, Eddie tries to get a task force to stop the Flash; and Caitlin and Cisco deal with a new team in S.T.A.R. Labs.

David Ramsey
as Diggle
View All

Critic reviews for Flash vs. Arrow

While none of us wants to see a grittier The Flash, since its earnest joy is what makes it such a good show, it was gratifying to see Grant Gustin show off his darker side for a bit.

It's funny, it's clever, and it succinctly reveals a lot about both characters.

If producers want to turn The Flash and Arrow into a classic team-up a la Superman and Batman, they'd have to nail a dynamic that ensures when its two very different heroes meet up, it's something very special. And "Flash vs. Arrow" was just that.

"Flash vs Arrow" is a hugely busy episode - it's enormous fun, and the addition of elements from Arrow makes it certainly one of the most thrilling episodes of The Flash so far.

We're still more than a year away from Batman v Superman, but this undercard fight could well turn out to be more entertaining than the main event.

It bridges the two worlds with very little fanfare, suggesting that either character could pop in and out of the other's city without question and that, the wink at a promise of a return, is what makes the episode so good.

Could stand on its own to anyone who doesn't like/watch Arrow... If I were a fan of just The Flash, I don't think I would have felt ripped off by what the series had to offer tonight. And as someone who watches and enjoys both, this was a real treat.

Expectedly super - once one accepted Oliver's extra-prickly personality within the Central City town lines... And then you had the humor - so, so much wonderful humor, from all corners.

To say "The Flash vs. Arrow" exceeded my expectations is an understatement. There were some cheap shots that could have been left out, but they didn't detract from an otherwise excellent hour of television.

Discuss The Flash on our TV talk forum!