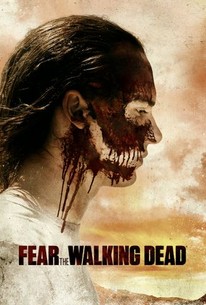 Critics Consensus: A distinctive ensemble brings a compelling flavor of Fear to The Walking Dead mythos, but this ambitious spinoff still shares its originator's penchant longwinded pacing that may diminish the tension for some viewers.

Critic Consensus: A distinctive ensemble brings a compelling flavor of Fear to The Walking Dead mythos, but this ambitious spinoff still shares its originator's penchant longwinded pacing that may diminish the tension for some viewers.

The fight to survive against the walker horde continues in the third season of "Fear the Walking Dead." Members of Madison's family come together in an unlikely reunion in a military compound. After a daring escape, the group find their way to Broke Jaw Ranch, whose members are locked in battle with a Native American colony for revenge and resources. New alliances are forged, new enemies are made, and old friends believed to be dead emerge alive. Madison's relationship with her children continue to be tested even as she succumbs to ruthlessness. "Fear the Walking Dead" once again stars Kim Dickens as Madison Clark, Frank Dillane as Nick Clark, Alycia Debnam-Carey as Alicia Clark, Colman Domingo as Strand, Danay Garcia as Luciana, and Mercedes Mason as Ofelia. Joining them are Daniel Sharman and Sam Underwood as Troy and Jake Otto, Dayton Callie as Jeremiah Otto, and Ruben Blades as Daniel Salazar. Ray McKinnon guest stars as Proctor John.

Eye of the Beholder The New Frontier TEOTWAWKI 100 Burning in Water, Drowning in Flame Red Dirt The Unveiling Children of Wrath Minotaur The Diviner

Fear the Walking Dead has come to resemble ... a complicated soap opera set among scruffy yet fashionably dressed survivors who deal with each other's feelings even as a decomposing dead guy occasionally staggers through the frame.

Episodes 2 and 3 are an encouraging start, and the new setting has promise, with plenty of possible character dynamics to explore.

Although it has improved, Fear the Walking Dead continues to suffer from characters that satisfy the viewer, that make you want to accompany them in their survival adventure, to mark them in some way. [Full Review in Spanish]

Fear has finally mastered the one thing that has plagued both this drama and its predecessor: narrative pacing.

Fear The Walking Dead builds tension in increments and gives its story room to breathe, resulting in a strong start to the season.

Matt Joseph
We Got This Covered
View All Critic Reviews (6)

There are no featured audience reviews yet. Click the link below to see what others say about Fear the Walking Dead: Season 3!

Discuss Fear the Walking Dead on our TV talk forum!