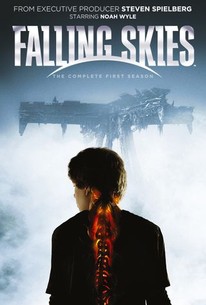 Critics Consensus: Despite the lack of edginess and gore of more popular dystopian tv programming, Falling Skies still engages with a new spin on the classic alien invasion trope.

Critic Consensus: Despite the lack of edginess and gore of more popular dystopian tv programming, Falling Skies still engages with a new spin on the classic alien invasion trope.

Falling Skies chronicles the chaotic aftermath of an alien attack that leaves most of the world completely incapacitated. In the six months since the initial invasion, survivors band together to begin the difficult task of fighting back against the aggressive aliens. Outside of Boston, history professor Tom Mason (Noah Wyle) helps lead a small army named 2nd Massachusetts in the battle of their lives to preserve their families and what's left of mankind. Falling Skies is executive-produced by Steven Spielberg, along with DreamWorks Television heads Justin Falvey and Darryl Frank, Graham Yost and screenwriter Robert Rodat, who wrote the pilot from an idea he co-conceived with Spielberg. Mark Verheiden and Greg Beeman serve as co-executive producers.

Will Patton
as Weaver

Daniyah Ysrayl
as Rick
View All

Unfortunately, this eight-week series, dramatizing the efforts of a scrappy band of humans to fight a superior alien invasion, sandwiches every sci fi cliché from Battle: Los Angeles to War of the Worlds into one predictable program.

Competently directed, acted and written to a point.

In due time, it starts to take hold, telling its timeworn alien invasion tale in ways that might well pull you along.

It has a solid Saturday-matinee tone, as the characters dart through the wrecked streets with dirt on their cheeks and rifles on their shoulders.

Falling Skies is looking like the season's best popcorn television.

Though alien-invasion shows have not fared well on television as of late, with its tremendous production quality and a seeming partiality for faith and patriotism, TNT may succeed where the big boys failed.

The basic story is pretty intriguing so far, and some of the action scenes are gangbusters, especially in the first hour where they spent all the money.

We've seen a lot of alien invasion stories before, but you have to give Falling Skies credit for at least taking a different tactic than most.

Noah Wyle leads an excellent cast, who for the most part projects the philosophy of optimism in the face of the end of the world.

The serial makes you wanna watch more and more about the story and the happenning evemts in the series. Maybe some people want to have more series althogh they know that there cannot are more than needed series of the serial. The first season makes you think that the people are gonna only try to survive and not go to battle for their planet and their lifes back. But they together with surviving the alien " apocalypsis " but they try go destroy them to make them leave the planet. The season shows the happenning in the begging couple of weeks or months of the alien invasion.