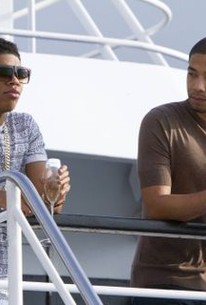 A music mogul plans for the future of his empire after learning he has a disease in the series premiere of this drama, which follows his struggle to choose an heir as his three sons and his ex-wife battle each other to take over the hip-hop throne.

Antoine McKay
as Bunkie
View All

In the end, to me it seems like Daniels wanted to make a black nighttime soap and ended up wrapping it shoddily in rap music so that he could sell it easier.

Almost all aspects of the pilot work. The characters are engaging (for the most part), the music is terrific and Taraji P. Henson is in it, so it's automatically getting bonus points for that.

This opening salvo isn't just a mere disappointment; this is the engine stalling and catching fire before it even makes the first lap.

This show is a hot mess but it is a really watchable hot mess with great performances by Taraji P. Henson and Jussiee Smollett (Jamal), in particular.

If Cookie and Lucious' pow-wow is the best private moment in the pilot, the party is Empire's best, King Lear-iest public one.

From the minute we first see Terrence Howard's Lucious Lyon... we know this sudsy soap-opera is going to get more over-the-top with each passing minute.

It's a good, old-fashioned King Lear set-up, hence the wink, but it has an irresistibly contemporary setting.