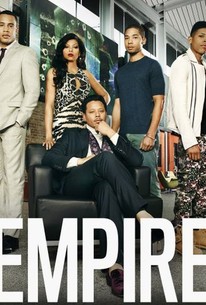 Critics Consensus: Though heavy on melodrama, Empire elevates the nighttime soap with its top-notch cast, musical entertainment, and engrossing plots.

Critic Consensus: Though heavy on melodrama, Empire elevates the nighttime soap with its top-notch cast, musical entertainment, and engrossing plots.

In the first season of this drama, music mogul Lucious Lyon (Terrence Howard) is informed he only has three years to live after being diagnosed with ALS. This just after he announces plans to take Empire Entertainment, a world-famous record company he runs with his family, public. Acting as a hip-hop King Lear, the patriarch realizes he must cede the keys to his kingdom to a worthy successor, and so he pits his three sons against one another in a battle for control of his multi-million dollar throne. The Lyon boys couldn't be more different: There's college-educated, business-minded executive Andre (Trai Byers); the talented and sensitive singer-songwriter Jamal (Jussie Smollett); and brash rapper Hakeem (Bryshere Gray). But they aren't the only ones vying for the dynasty when Lucious' ex-wife Cookie (Taraji P. Henson) is released from prison after having served a 17-year sentence for hustling drugs, the profits from which were used by Lucious to start Empire.

Pilot The Outspoken King The Devil Quotes Scripture False Imposition Dangerous Bonds Out, Damned Spot Our Dancing Days The Lyon's Roar Unto the Breach Sins of the Father

It roars into view and keeps everything humming throughout its all-important first episode.

The series' sudsy premise might work if it were matched by more energy in the acting and staging, but the presentation suggests we're supposed to take the action seriously. Most viewers will simply shrug.

Empire soars highest when probing the conflicts and contradictions of the black family, making high drama out of the dysfunction lying just beneath the surface.

With plot to spare, Empire surely has something for everyone.

Tense and tawdry, Empire is the rare network drama to know exactly what it is from the jump.

Forget TV dramas about police departments and hospital wards - a show about a record label comes with all that conflict, plus outfits, plus songs.

One hopes that Daniels and writer Danny Strong, who teamed up on the 2013 civil rights film The Butler, can keep this good stuff coming even as they follow their over-the-top storyline to its sudsy conclusion.

When the matriarch is released from prison, the entire family involved in the music industry's secrets are revealed. Empire is a clever drama with a lot of good tunes and a complex storyline, though ridiculous at times, it is a well crafted entertainment.