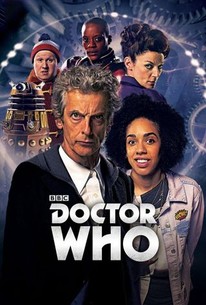 Critics Consensus: Peter Capaldi's darkest wit shines in his final season as Doctor Who thanks to the newest foil and friend, Bill Potts.

Critic Consensus: Peter Capaldi's darkest wit shines in his final season as Doctor Who thanks to the newest foil and friend, Bill Potts.

The Doctor (Peter Capaldi) returns for the 10th season of this sci-fi television show, now accompanied by Bill Potts (Pearl Mackie) and the returning Nardole (Matt Lucas). Together, the trio will visit exotic locations and time periods, such as Scotland in the 2nd century, the Roman Empire and even the distant future, in one of Earth's first colonized planets. Plus, the Doctor poses as a university teacher, while he guards the vault holding Missy (Michelle Gomez).

Kiran Shah
as Emojibot
View All

News & Interviews for Doctor Who: Season 10

View All Doctor Who: Season 10 News

Critic Reviews for Doctor Who: Season 10

We have seen very good female characters in the series and it may be the cornerstone that 'Doctor Who' needs to grow even more in years to come. [Full review in Spanish]

Taken in full, "The Pilot" was less than the sum of its parts.

The point, we think, isn't that the show is too dark; it's that it's too repetitive in its modern form.

All in all, The Pilot is a good episode, and a very encouraging start to the new series as a simple companion-introductory episode.

Capaldi, we now know, will go out all arms blazing and protesting his head off.

Showrunner Steven Moffat and Peter Capaldi have stepped up their game for their last trip in the Tardis.

For many, TV drama will never be the same.

With Mackie's Bill and Lucas' lovable cyborg Nardole on board, Capaldi's final season in the TARDIS has the chance to start fresh ... that's the true beauty of Doctor Who. And we can't wait to see where the show takes us next.

Mackie is an energetic and enjoyable addition to the show, and her down-to-Earth character brings a healthy skepticism to all things Doctor-related.

The most cherishable thing about the girl called Bill is that she pricks the Doctor's self-regard, which is about goddamned time.

Audience Reviews for Doctor Who: Season 10

There are no featured audience reviews yet. Click the link below to see what others say about Doctor Who: Season 10!