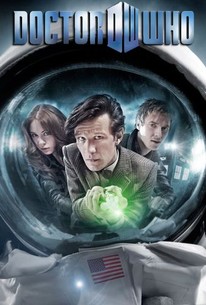 Critics Consensus: Doctor Who morphs once again into an enchanting odyssey in its fifth season, spearheaded by Matt Smith's endlessly endearing incarnation of the Time Lord.

Critic Consensus: Doctor Who morphs once again into an enchanting odyssey in its fifth season, spearheaded by Matt Smith's endlessly endearing incarnation of the Time Lord.

T he Eleventh Doctor (Matt Smith) and his new companion Amy Pond (Karan Gillan) embark on a series of incredible adventures through time and space in the fifth series of the enduing British sci-fi series. Traveling in the TARDIS, The Doctor, Amy, and others face off against a formidable onslaught of foes including Cybermen, Daleks, Weeping Angels, Smilers, Sea Devils, The Entity, and the dreaded Vashta Nerada. Meanwhile, memorable encounters with such noted historical figures as Vincent van Gogh and Winston Churchill reveal just how different the present might have been without The Doctor and his companions to save the day.

Matt Smith
as Doctor Who

News & Interviews for Doctor Who: Season 5

View All Doctor Who: Season 5 News

Critic Reviews for Doctor Who: Season 5

I may be chancing my arm, but it's obvious from the off that the 11th Doctor will be up there with the greatest. Despite his youth, Matt Smith instantly embodies our ancient hero, the "mad man with a box".

Ablaze with confidence, subtly shifting from the cinematic verve of the Russell T Davies era to a quirky new flavour.

Despite the occasional misfire though, it's hard to knock Steven Moffat's remarkably assured debut as Doctor Who show runner. Season 5 mightn't have been perfect but it reinvigorated the aging time-travel format with a burst of creative energy.

Long live David Tennant, of course, but if "The Eleventh Hour" is any indication, Matt Smith is "the man," even if the Doctor promises in this episode never to use that phrase again.

Even allowing for the fact that the world is going to end in 20 minutes ("The universe is cracked!"), you do feel he could simmer down a bit. And that goes for the new scriptwriter, Steven Moffatt.

Like Tennant's first appearance, Smith throws himself into the part as if he'd been playing it all along, even though he shows up wearing Tennant's old clothes and still shaking up some of the after-effects of his transformation.

A whole new world of regulars is seamlessly introduced, the story has both pace and complexity, and it's refreshing not be in London again.

[A] family-friendly science-fiction series redefined for the new millenium by an especially grand, generous spirit to its storytelling. [Blu-ray]

It felt a bit routine, as if keeping the machine running was now the paradigm.

Audience Reviews for Doctor Who: Season 5

One of the best seasons of Doctor Who. With the possible exception of "Victory of The Daleks," every episode shines, with "Vincent and The Doctor" being in the race for one of the best episodes of series.

An unpleasant shock to wake up and find that this is the Doctor Who we are to be subjected to after the showrunner change.