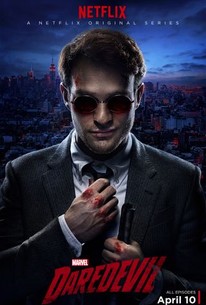 "Marvel's Daredevil" is a live action series that follows the journey of attorney Matt Murdock, who in a tragic accident was blinded as a boy but imbued with extraordinary senses. Murdock sets up practice in his old neighborhood of Hell's Kitchen, New York where he now fights against injustice as a respected lawyer by day and masked vigilante at night. --(C) Netflix

Into the Ring Cut Man Rabbit in a Snowstorm In the Blood World on Fire Condemned Stick Shadows in the Glass Speak of the Devil Nelson v. Murdock

Charlie Cox simply owns the role of Matt Murdock... He sinks so perfectly into the role that (as much as we might love Ben Affleck) he makes us forget the 2003 film ever existed.

Charlie Cox reinvents the gentle hero for the good.

Yes, we can finally put visions of Ben Affleck in red in the rearview mirror as Matt Murdock has at long last been given the treatment his legions of fans have long-claimed he deserved.

D'Onofrio's performance is the one truly great thing about a generally pretty-good show.

Marvel's Daredevil gets the balance right.

[Vincent D'Onofrio] is amazing as always.

The ambition of season 1 has yet to be bettered elsewhere in the Netflix Marvel universe.

But if you watch one episode, you'll watch them all.

Here there is no time for spandex, aliens, futuristic armor or thunder gods. Only blood, moral conflicts and a lot of pessimism. Welcome to the dark side of Marvel. [Full Review in Spanish]

Absolutely dreadful to watch. All round horrible: terrible dialogues, meaningless storyline and no climax at all. Gosh, please cancel it after season 2.

Daredevil is brought into the Marvel Cinematic Universe as an original Netflix series. Season 1 follows blind lawyer Matt Murdock as he moonlights as a masked vigilante combating the criminal gangs in Hell's Kitchen, which he traces back to a secret crime boss named Wilson Fisk; meanwhile Fisk works with his partners to control and rebuild the Hell's Kitchen district. Charlie Cox and Vincent D'Onofrio both deliver excellent performances that make their characters extraordinarily compelling. And, the writers do a good job at developing the characters and plot slowly over multiple episodes. Also, the show does some nice tie-ins with the Avenger films by addressing the effects of the Battle of New York. Incredibly well-made, Season 1 of Daredevil is an impressive and bold crime drama.

I like dark and gritty. And dark and gritty on Daredevil is definitely the way to go if you want to make a more grounded superhero series. It's a complex enough character with very cool side-kicks, plenty of gangsters and masked dudes to kick his ass very often. This isn't your typical hero. He kicks some major ass but he gets his ass served more times than you can count too. That makes us root for this guy, who's really trying to make the city he lives in a better place but where he's also one step too close to become what he's trying to fight. Then we have a character with the same motivations but doing things on a very different scale and level. I'm obviously talking about the Kingpin, which is played rather well by Vincent D'Onofrio. Instead of being a loudmouth like he's usually portrayed, in here he's just a very shy and socially awkward guy, with an immense rage inside that obviously explodes very often. A bit of a cliché but works for the most part. The main draw on the show is that the writing is not that great. There's plenty of cringy dialogue and clichéd phrases running amok to truly immerse us on this show, but it's still better than your usual stuff. Some episodes are needlessly too long and sometimes take too much time to develop. Storylines and characters show up for very few episodes (Rosario Dawson, are you even a main character as advertised?), leaving us a bit dry in the end, which is a bit worrying since we're having other super-hero shows coming up next on Netflix, that will converge alongside Daredevil into the Defenders and we still don't have a confirmation for S02 for Daredevil itself, turning all of it into a mess.

With time comes experience, and with that experience, Marvel has taken a bunch of barely watchable movies about superheroes, and turned themselves into a global empire. When Marvel first started making movies, they never dreamed they'd be getting the stars, exposure, or the nearly half a billion dollar box office receipts for every film they release. Perhaps the most overlooked element in Marvel's wave of success is the writers and directors, which is really what has led to the big stars, better films, and ultimately the TV series. Marvel attempted to introduce Daredevil in 2003, in what amounted to one of the worst superhero movies I've ever seen. The plot was nonexistent, they rushed the characters backstory, and the acting was a joke. They learned from theses mistakes however, and reinvented the character in the Netflix series by the same name. Matt Murdock (Charlie Cox) was blinded in an accident when he was a child, but despite losing his sight, he gained other abilities. His other senses became super strong and he was trained to use them to help defend himself. As a youth, despite his training, Murdock decided to fight injustice in the courts and became a lawyer, eventually starting a firm with him best friend, Foggy Nelson (Elden Henson). Being a lawyer didn't always get Murdock the justice he sought, so he started using his training, and going out at night to fight crime as the devil of Hell's Kitchen, eventually dubbed by the press as Daredevil. On the surface, people will look at this series and see another superhero show, but when you sit down to watch it, you will realize that the writing makes all the difference. This is one of those shows where the superhero element is an after thought, because everything else is so realistic and believable, that aside from the fight scenes, you forget that you're watching a Marvel superhero show. The criminals developed for this show, Wilson Fisk (Vincent D'Onofrio) and The Punisher (Jon Benthal) are as good, if not better, than any villain ever seen in any of the Marvel franchises. Beyond that the show has a lot of legal and courtroom elements to it, a medical angel, family and romance issues, I don't say this often, but this show actually does have a little bit of something thrown in there for absolutely everyone! Even if you're not into superheroes, even if you can't stand them, there will be at least one element to the Daredevil series that you will enjoy, I guarantee it. As for the fans, I know it's been a while, but no need to fret, Daredevil have been renewed for a third season, and lead actor Charlie Cox has signed on for the eventual collaboration series, that will include all four Netflix-Marvel characters.