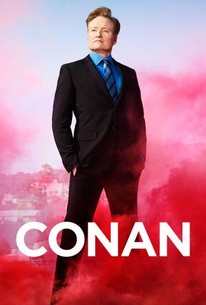 Critics Consensus: Despite its host's frenetic personality, this season of Conan struggles to find fresh spark amid a downsized budget and modest runtime.

Critic Consensus: Despite its host's frenetic personality, this season of Conan struggles to find fresh spark amid a downsized budget and modest runtime.

Underwhelming open that feels underfunded too.

Whether that bodes well for the growing pains of Conan's new format or not, it at least makes for an entertaining half-hour of breezy late-night television.

Yet the host still began his show with a monologue, complete with snarky asides from his sidekick Andy Richter, who thankfully survived the downsizing.

Even the more conventional aspect of O'Brien's talk show, the interview portion, had a different spin.

It all felt, well, dutiful - a grind to get through.

That's what's so great about the new streamlined Conan. Nu-Conan, if you will. He is doing what he feels like doing, and nothing else.

It takes great skill to be so soothing, especially when herky-jerky absurdity is the basis of one's act. Ovaltine is delicious, and O'Brien has found its ideal serving size.

Even if this first foray into the half-hour format isn't a form-busting revelation right out of the gate, it hints at the possibilities of a reenergized comic mind prodding the late-night electric fence for weaknesses.

This "Conan" is clinging to what remains of the usual ways. Truncated like this, it's a show that feels over as soon as it starts.

We're all sort of in the dark as to what, exactly, this all looks like in a few months... And that's sort of exciting.

There are no featured audience reviews yet. Click the link below to see what others say about Conan: Season 9!