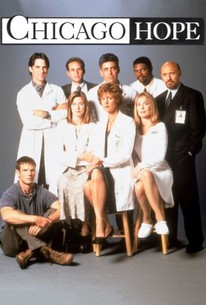 Critics Consensus: Chicago Hope is a beacon of ambition among hospital dramas, gifting a terrific cast with layered storylines and plenty of heart, but the series could use a prescription for toning down the occasional mawkishness.

Critic Consensus: Chicago Hope is a beacon of ambition among hospital dramas, gifting a terrific cast with layered storylines and plenty of heart, but the series could use a prescription for toning down the occasional mawkishness.

An absorbing medical series set in a top-flight Chicago hospital. Created by David E. Kelley, it debuted in September 1994 on CBS, opposite another new hospital drama, `ER.' While never as popular as its NBC competition, the edgy ensemble series did receive a steady stream of Emmy nominations (and the occasional win) and remained on the air for six seasons, despite many cast changes.

Pilot: Chicago Hope Over the Rainbow Food Chains With the Greatest of Ease You Gotta Have Heart Shutt Down Genevieve and Fat Boy Death Be Proud Heartbreak The Quarantine

"Chicago Hope"...sails even more aggressively into the uncharted waters it navigated somewhat rockily in it s pilot, challenging us with uncommonly complicated characters and provocative story lines.

Chicago Hope is remembered as a good drama that was just the second best hospital show of the '90s.

The characters are strong and fascinating.

Intelligent, fleet, emotionally complex and lightly dusted with Kelley's celebrated sense of the absurd, this is the best hospital show since St. Elsewhere.

On balance, Chicago Hope has the benefit of scripts by Mr. [David E.] Kelley, who knows every television trick for tugging at heartstrings and pulling away for a neatly moving fade-out.

Mostly, "Chicago Hope" is -- handsome and polished and stubbornly superficial.

Don't cram too many story lines into one episode, especially if you're planning to leave some of them hanging.

Less smart are the plots of the first two episodes, which treat your heartstrings like taffy pulls while imploring you to care which high-risk patients survive.

There are no featured audience reviews yet. Click the link below to see what others say about Chicago Hope: Season 1!