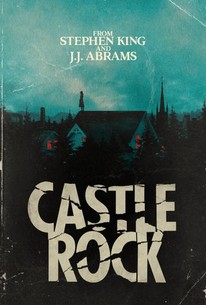 Critics Consensus: A meticulously crafted mystery brimming with allusions, Castle Rock is bound to please even the pickiest of Stephen King fans -- though mileage may vary for casual viewers.

Critic Consensus: A meticulously crafted mystery brimming with allusions, Castle Rock is bound to please even the pickiest of Stephen King fans -- though mileage may vary for casual viewers.

Season 1 of the drama series opens with death-row lawyer Henry Deaver (André Holland) receiving a call asking him to come back to his hometown of Castle Rock, where a man was found in an abandoned block of the local penitentiary apparently having been kept captive by the former warden Dale Lacy (Terry O'Quinn), who recently committed suicide. Henry travels back home, where he reconnects with his mother Ruth (Sissy Spacek) and Sheriff Alan Pangborn (Scott Glenn), who saved his life as a child. As the season progresses, Henry tries to figure out who the imprisoned man really is, discovering terrible secrets about him, the warden and the whole town along the way.

For a purposely misleading series that prided itself on all its enigmas, Castle Rock answered its major questions in unexpected and impressive ways, while once again tying itself to the greater King universe.

When it tries to be a wonderland for King fans, it races past the line of referential, rounds through fan service, and steps into cliché, sometimes even inching toward self-parody.

Castle Rock looks to be one of the best King things in years, even though the man himself serves primarily as a road map and blueprint.

Starts slow and gets better -- while an excellent cast (and lead, in Holland) front a story that's a little more psychological than supernatural in the early going.

"Castle Rock" is a giant basket of Easter eggs for King people, but for the rest of us it's a decent show layered with supernatural secrets waiting to be decoded.

The show makes skillful use of its episodic medium, carefully pacing its storylines and building out its world while still making sure each hour is filtered through generous helpings of creepiness.

It's so rare to see seniors with dementia centered and humanized on TV.

There are many elements that 'Castle Rock' makes use effectively. [Full Review in Spanish]

Strong performances can't save this satisfactory Stephen King fan fiction that will have you running back to the source material.

Not that Castle Rock isn't genuinely scary at points - it is... But in seeking to mold suspense, the Sam Shaw and Dustin Thomason offering had a distinct tendency to lose me.

It's just a shaggy-dog story: they have no idea where it's going. The acting is good to medium and it's shot well but this is a lot more Abrams and 'Lost' than Stephen King. It's a load of geeky Easter eggs and signs pointing nowhere. No narrative thrust (episode seven and nothing has happened except a lot of stuff that makes no sense) and a whole lot of vagueness that people mistake for suspense.

Hulu and Stephen King team up again. This is a better tv show and offers a mystery with the typical darkness that comes with King's storytelling. I now want a Needful Things remake. Someone like Netflix or Hulu would be suited to remaking all Stephen King's books, that is a slice of Hollywood that would separate them. 10/02/2019