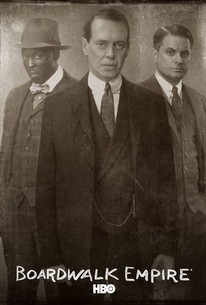 Critics Consensus: Boardwalk Empire continues to benefit from its meticulously realized period trappings, but what keeps the show watchable is its supremely talented ensemble players.

Critic Consensus: Boardwalk Empire continues to benefit from its meticulously realized period trappings, but what keeps the show watchable is its supremely talented ensemble players.

Series 4 of the Prohibition-era drama opens in February 1924 as Nucky makes peace with New Yorkers Masseria and Rothstein, moves into the abandoned Albatross Hotel and, coincidentally, spreads his wings with a potential real-estate bonanza in Florida, where he's smitten with a saucy barkeep. Back in Atlantic City, Chalky runs the boardwalk's Onyx Club, though the mysterious Harlem intellectual Dr. Narcisse challenges his North Side reign, and Eddie finally gets a promotion. In Philadelphia, Eli's son Willie dives in over his head at college; while in the Midwest, Nelson pulls double duty for Chicago mobsters Capone and O'Banion, and a wandering Richard reconnects with his roots. With Shea Whigham, Brian Geraghty, Ron Livingston, Margot Bingham, Anatol Yusef and Domenick Lombardozzi.

Jacob A. Ware
as Harold Selby

Nine more months to wait and see how Boardwalk will stun us again.

It was a slow-cook season filled with tons of great moments and performances.

Empire is richer, deeper, and -- if possible -- even more beautiful.

A Nucky scene will always be a good scene. The same could be said for a new season of Boardwalk Empire.

The moral dimension is missing from nearly all of Boardwalk Empire's characters, who murder and maim, if somewhat discriminately.

The most promising addition this season is Jeffrey Wright.

The finale efficiently tied many of the loose ends from this season together while closing the book on some hated and loved characters, shaking the status quo up for next season.

Tragic and heartbreaking in ways you might not have imagined. Moreover, unlike previous seasons, nothing is wrapped up nicely in a bow.

I was wholly satisfied, even if I do already want the next course.

Now that a depressing mood has been set with the authentic period piece, it's time to discuss the sensational season of Boardwalk Empire and its firmly stuck landing...

Season 4 started the go down a bit with Nucky being located in Florida while Dr. Narcisse had a feud with Chalky. The plot seemed a bit uneven but still watchable with plenty of fun.

An improvement over the last season, this new storyline gets intricate at first, seemingly without having a very focused goal in sight, but everything wraps up perfectly on the last episodes. Still, this is a very aimless season that doesn't take our characters anywhere they weren't before, asides from a couple of them. There was a lot of potential to push this season forward to some of the highlights of the Prohibition era, but not much happened in the end. It's a shame and that's probably what got this show one last (warning) season, shortened to 8 episodes. It's now or never Terrence Winter, you have the golden keys to end this in glory or to monumentally screw it up.