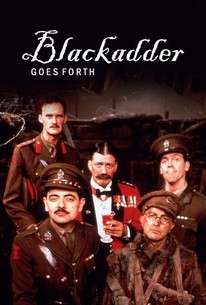 Critics Consensus: Undoubtedly the most heart-filled of the Blackadder series, Blackadder Goes Forth somehow manages to find real humor in the horrors of warfare, before coming to an appropriately poignant and poetic close.

Critic Consensus: Undoubtedly the most heart-filled of the Blackadder series, Blackadder Goes Forth somehow manages to find real humor in the horrors of warfare, before coming to an appropriately poignant and poetic close.

Blackadder Goes Forth is the fourth and final series of the BBC sitcom Blackadder. The series placed the recurring characters of Blackadder, Baldrick and George in a trench in Flanders during World War I, and followed their various doomed attempts to escape from the trenches under the misguided command of General Melchett.

In tribute to the real horrors of World War 1 and the final series for these beloved characters, 'Goodbyeee' stands as one of the most powerful, emotional finales of all time.

The writers and cast are able to be incredibly respectful, not to mention emotionally affecting, as they continually lampoon the most tragic of all comedies, modern warfare.

Leave it to the Brits to find humor in World War I.

The satirical pen of Curtis and Elton was at its sharpest when it came to tackling the topic of the Great War in 1989's Blackadder Goes Forth.

The show elicits a few helpless belly laughs, but it takes an initial period of adjustment to get to them.

For all its formulaic nature, the show was consistently sharp and funny, and even, with its fourth series, Blackadder Goes Forth showed off a beating heart of compassion.

Despite the show's comedic overpinnings, there are emotional underpinnings that were missing from the previous series, where moments of danger felt camp...It's poetic. Four star series.

The last episode, however, although completely over the top...has to be one of the greatest interpretations of the madness of war that has ever been put on film.

Completely switching the show around, Messrs Curtis, Elton and Lloyd showed their skill and delivered a perfectly pitched, poignant ending. It still gets you every time.

"Goodbyeee" is a masterpiece, a hilarious and painful crystallization of everything Blackadder does well. It is without a doubt the best episode of the series and more than that, it's one of the best series finales in television history.

Discuss Blackadder Goes Forth on our TV talk forum!