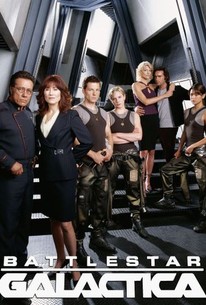 David Eick and Ronald D. Moore's dark reinvention of the cult sci-fi series picks up where the 2003 miniseries left off. An old battleship named Galactica leads a fleet of survivors away from their planets, which were decimated by a nuclear attack perpetrated by a race of machines known as Cylons. Galactica's senior officer, Cdr. William Adama (Edward James Olmos), and the newly sworn-in leader of the Twelve Colonies of Kobol, President Laura Roslin (Mary McDonnell), discover how relentless the Cylons can be when they briefly manage to track, harass and nearly exhaust the fleet. Worse, the Cylons have created copies of machines that appear human, some of which have infiltrated the fleet as unwary sleeper agents. Lt. Sharon "Boomer" Valerii (Grace Park) learns she is a Cylon after she sabotages Galactica's water supply. And another copy of Boomer uses Lt. Karl "Helo" Agathon (Tahmoh Penikett) as a guinea pig in an experiment the Cylons are conducting on the devastated Colonial world Caprica. A suicide bombing on Galactica forces the Colonial leadership to publicly divulge the existence of humanoid Cylons and the likelihood that some are operating within the fleet, fostering feelings of paranoia in an already stressed and depressed populace. Adama and Roslin are tasked with forging a new government and replenishing their supplies of water, fuel and fighter pilots, while they also try to keep hope alive during their search for the fabled lost colony Earth. Meanwhile, Dr. Gaius Baltar (James Callis) must cope with his role in the near annihilation of his people, his place in the new space-faring community, and the intrusions of an incorporeal entity---that only he can see---which has taken the form of the sixth humanoid Cylon model (Tricia Helfer) to guide the troubled genius.

Morris Chapdelaine
as Reporter No. 2

James Ashcroft
as Spectator No. 1

Curtis Ricks
as Marine No. 2

Graham Young
as Marine No. 1

Allison Warren
as Reporter No. 4

33 Water Bastille Day Act of Contrition You Can't Go Home Again Litmus Six Degrees of Separation Flesh and Bone Tigh Me Up, Tigh Me Down The Hand of God

[The pilot is] a masterfully crafted episode of television, and if you want something that's going to grab you right away, this is it.

The acting is generally good, and seems to get better as the series progresses and the actors get more comfortable playing their respective roles.

The political maneuvering and philosophical debates have relevance for our own time, but there's more than enough action to keep the show from getting preachy.

And without giving anything away, viewers will be in for a number of downright unexpected twists and turns as they sit captivated through this triumphant first season.

The basic-cable budget sometimes shows in the production, but the writing and performances are first-class, especially Edward James Olmos as the noble but authoritarian commander in charge of saving the last remnants of humanity.

As solid as each episode is, I feel like I want to skim through the remaining episodes and get right to the end of the second season.

BSG is filled with scenes where brilliant actors such as Mary McDonnell or Edward James Olmos are called on to deliver lines about 'firing up the FTL drives for a jump' with a straight face.

But if anyone had any doubts about the strength of the brand new reboot of Battlestar Galactica, then surely 33 - its first proper episode - would have put them to bed.

An episode like this almost renders further discussion of it meaningless, because it needs to be experienced, and felt, in order to be understood.

One of the best seasons of television ever produced, Season 1 of Battlestar Galactica presented a revolutionary new vision of science-fiction. The show follows the ragtag Colonial feet as they struggle to survive on the run from a race of synthetic robots called Cylons who destroyed their homeworlds and are intent on wiping out humanity. Starring Edward James Olmos, Mary McDonnell, Katee Sackhoff, James Callis, and Tricia Helfer, the cast is quite impressive and delivers some extraordinary performances. The storytelling is also incredibly well-done, constructing an over-arcing plot that's told over 13 episodes; exemplifying the serial format. Avoiding the common tropes of the genre, the series does a remarkable job at staying character centric. And, creator Ronald Moore does an excellent job setting up a mythology and at bringing a sense of realism to the show. Additionally, there's a significant spiritual aspect to the series and its exploration of humanity that's rather unique and compelling. Provocative and edgy, Season 1 of Battlestar Galactica delivers a powerful space opera that's full of action.