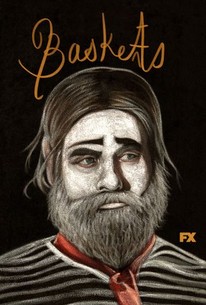 The second season of this FX original comedy series finds the titular Chip Baskets (Zach Galifianakis), a struggling clown, in the midst of an unraveling marriage and a failing career. As his chances of making it as a professional clown look increasingly unlikely, Chip persists in his shaky attempts at pursuing his dream and finding romance along the way. This season, Chip's mother, Christine (Louie Anderson), also embarks on her own journey as she seeks personal fulfillment and focuses on her own happiness instead of that of her children. Also starring Martha Kelly and Sabina Sciubba.

This is about Baskets, a show that made enough of an impact that Louie Anderson won a very much deserved Emmy but that not too many people are writing think pieces about. But maybe they should be

Baskets will never be a walk in the park. And it no doubt remains too dark for many. Some rays of light are showing, though... Nothing overly warm and toasty, mind you. But some welcome little thaws.

FX's beautifully melancholy Baskets only gets more solemn, sad, strange, sympathetic and singular with its richly poignant second season. In our clownish world, Zach Galifianakis continues to provide the laughter and pain in equal measures.

Will Ashton
We Got This Covered

The shallowness of the American Dreams in Baskets are a direct function of the bland comfort a corporate suburban existence makes possible.

So lovely. So strange. So happy FX continues to make a place for it on my TV.

Baskets is full of the kind of people whom pop culture rarely bothers to humanize: the elderly, the obese, the destitute. It's simultaneously wondrous and heartbreaking.

The chemistry between Anderson and Galifianakis drives the best parts of the new season, but it's not at the expense of sharp humor, biting irony and plummeting self worth rendered funny by its sheer hopelessness.

As before, Anderson is something beyond brilliant. Making tender a role that could easily become grotesque, he is completely alive as Christine. There isn't a line that comes from his mouth that doesn't seem to have been born in the moment he speaks it.

Lots of the laughs come from the kind of physical comedy that used to appear in silent movies.

FX's dark comedy Baskets continues to clown around in Season 2. After leaving home Chip Baskets joins a homeless group of street performers, but is forced to seek help from his mother when tragedy strikes. And while helping her son, Mrs. Baskets strikes up an unlikely friendship that leads to something more. This season Louie Anderson steps up and takes on a bigger role, and Zach Galifianakis stretches himself a bit, doing more switches between twin brothers Chip and Dale; further developing each of them. Yet the writing is still pretty weak, letting some of the sketches go on too long and leaving several story threads undeveloped. Still, Season 2 of Baskets, while it has problems, delivers some laughs and has some poignant things to say about family.