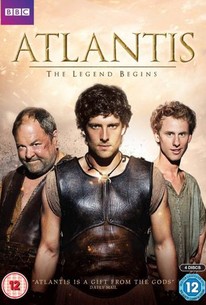 Critics Consensus: It may be a bit sloppy at times, but Atlantis succeeds as a giddy mixture of mythology and pulp fantasy with a charming and family-friendly vibe.

Critic Consensus: It may be a bit sloppy at times, but Atlantis succeeds as a giddy mixture of mythology and pulp fantasy with a charming and family-friendly vibe.

Legendary heroes and mythical creatures come alive in Series 1 of the adventure series that focuses on Jason (Jack Donnelly), a determined young man who is searching for his missing father. His journey leads him to the mystical city of Atlantis, where he encounters bull leapers, snake-haired goddesses and magnificent palaces that appear to have been built by giants. He is aided in his quest by new friends Hercules (Mark Addy), a gruff warrior with a tender soul, and Pythagoras (Robert Emms), a loyal ally with a brilliant mind. Along the way, Jason falls for the beautiful but lonely Princess Ariadne (Aiysha Hart), while Hercules becomes smitten with the charming and courageous Medusa (Jemima Rooper).

Will Merrick (II)
as Arcas.

Kids probably won't mind the phoned-in performances and dialogue, and parents will be grateful for anything that won't frighten or confuse their children. Although it's hardly a gift from the gods, Atlantis fills its niche nicely.

[Atlantis] was engineered to entertain families with older kids, and it pulls that off with reasonable success thanks to a trio of likeable do-gooders, an ever-rotating stable of evil-doers, and a much-needed splash of comedy.

As pilots go, "The Earth Bull" sped along too quickly for my taste, but the action was quality, the characters a joy to watch and the special effects weren't half bad either.

Atlantis is almost as cheesy as one of those Syfy Saturday-night horror spoofs.

It has a juvenile confidence that will serve it well, hearkening back to the likes of our own international productions Xena: Warrior Princess and (even) Hercules: The Legendary Journeys.

This opener doesn't quite muster enough of a balance between humour and horror.

This is a purely fun show that giddily mixes the lost city with the Spartacus legend, adds a dash of Medusa and Hercules, and throws in mathematician Pythagoras for good measure.

Atlantis is a rollicking good time, a mixture of pulp fantasy and mystery adventures à la Sleepy Hollow and Thor.

It will certainly fill viewers minds with misshapen mythology, but does so in a fairly charming, family-friendly way.

The series is insanely derivative even for a contemporary work of pop culture, but it's reflective of trends that have just slipped out of vogue.

There are no featured audience reviews yet. Click the link below to see what others say about Atlantis: Season 1!