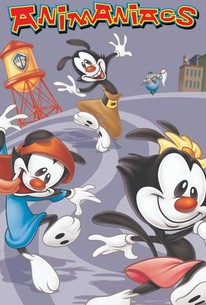 Wacky adventures of three Warners Bros. cartoon characters who finally escape from the studio lot, after being held there since the 1930s. An off-the-wall mix of cartoon shorts, musical numbers and comedy blackouts, the series is a combined effort of Steven Spielberg and Warner Bros. animation.

Maurice LaMarche
as The Brain

Filled with off-the-wall comedy and numerous parodies per episode, Animaniacsappealed to kids and adults alike.

Sometimes, a cartoon is served less by brilliance than it is by a running gag of people screaming bloody murder in one another's faces.

While most of the content in Animaniacs is frivolous and highly unrealistic, some segments do blend entertainment and educational quality in a kid-pleasing manner.

Animaniacs is a great cartoon that can be viewed by any age. Some jokes have adult innuendo, but it is buried so deep that you would have to be older to get most of the references.

As cute as they are funny, even when they're educating us, and we still can't believe they got that fingerprints joke past the censors.

There is one cartoon show with humor so spontaneous and witty that it takes both adults and children by complete and pleasant surprise... They are the stars of Animaniacs.

[It} combines the frantic, precious humor of Tiny Toons with an homage to the zany shorts Bob Clampett directed during the '30s.

It was Animaniacs that really hoisted the torch high for madcap, sketch-based cartoons that appeal to kids and adults. It was an attempt to make new Looney Tunes with new characters that were wholly original.

There are no featured audience reviews yet. Click the link below to see what others say about Animaniacs: Season 1!