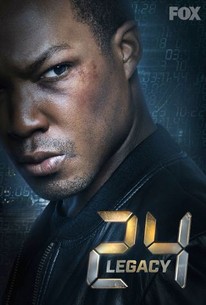 Critics Consensus: 24: Legacy offers well-acted escapism, yet this reboot also inherits many of its predecessor's flaws, and an early narrative rut signals a missed opportunity for reinvention.

Critic Consensus: 24: Legacy offers well-acted escapism, yet this reboot also inherits many of its predecessor's flaws, and an early narrative rut signals a missed opportunity for reinvention.

Taking place three years after the events of the final season of "24," this spin-off introduces a brand-new cast and features the return of the real-time storytelling technique that made the original series unique. Eric Carter (Corey Hawkins) is a former Army Ranger who led a mission to eliminate Sheik Ibrahim Bin-Khalid, a dangerous terrorist. Upon returning to the U.S., Eric finds out he's being targeted by Bin-Khalid's terrorist organization, so he seeks the help of CTU to protect him and his family. Rebecca Ingram (Miranda Otto), former CTU director and wife to Senator John Donovan (Jimmy Smits), is Eric's main and possibly only ally, considering an underground terrorist network with ties to the American political world make trusting other members of the counter-terrorist unit very dangerous. The first season centers around a race against the clock to stop a terrorist attack in the United States, and sees the return of some familiar faces.

Ismail Bashey
as Hammad
View All

Classic Vs. New Formula 24: What You Need to Know
TV Premieres Countdown for February 3, 2017
24: Legacy’s Jimmy Smits on Daddy Issues, Rogue One, and The Get Down

The first three episodes of "24: Legacy" will feel more like a missed opportunity, a chance for reinvention, which instead delivered a lot that we've seen before.

Maybe this isn't the time for stereotypes and gunfire. The original 24 came along at precisely the right time, in late 2001. Maybe this 24 should try again later.

The new 24 benefits greatly from three veteran actors: Miranda Otto ("Homeland") as a risk-taking intelligence officer, Jimmy Smits as her politician husband and Gerald McRaney as the politician's affluent father.

As impassive action heroes go, Hawkins is a fine successor to Sutherland.

Great cast, and Hawkins is a worthy Jack Bauer successor. But Legacy can be lethargic and loquacious. More action, less talk, will hopefully close out this day.

If the story was half as compelling as an average Homeland season, perhaps audiences could overlook the political commentary. But there's little urgency driving the conventional TV action... its stars' personalities are largely drowned out by exposition.

"24: Legacy" retains all the flaws of the original, and some of its strengths.

For all the addictive cliffhangers, the thing this reboot is most missing is the sense of gravity possessed by the original's best seasons.

The action-packed drama strikes a strong balance between the familiar and the new to breathe fresh life into the classic TV franchise. Corey Hawkins... is a worthy enough successor, and we're on board to see where this white-knuckle reboot goes from here.

The 24 spin-off, 24: Legacy, delivers an exciting and action-packed first season with all of the thrills and intrigue that has come to be expected from the franchise (despite the absence of Jack Bauer). When a group of terrorists wipe out a team of Army Rangers responsible for killing their leader CTU learns that the terrorist's son has planned a series of attacks in retaliation. Set in Washington D.C., and featuring all new original characters (though there is a guest appearance from the original 24) the show tries to be its own thing. Yet it still follows the standard 24 format of concurring subplot that end up intersecting, with betrayals, characters going rogue, and small terrorist plots leading into bigger ones. However, the characters aren't all that compelling or charismatic, having a generic feel to them. And the themes are also fairly generic; not really addressing any specific aspect of terrorism. While it's not quite as gripping as the original series, the first (and only) season of 24: Legacy is entertaining and full of suspense.