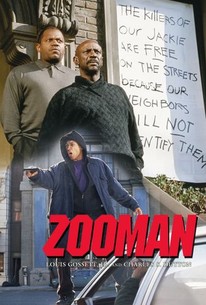 In this tough but literate urban drama (based on a play by Charles Fuller), Zooman (Khalil Kain) is a petty criminal and gangbanger who in the midst of a shootout with other gangsters accidentally kills a nine-year-old girl. The girl's father, Rueben Tate (Louis Gossett Jr.), is distraught over his daughter's death, but becomes even more upset when no one in the neighborhood will step forward to identify the murderer, even though there were many witnesses to the crime. Rueben enlists the aid of the media and posts signs in the community, hoping to shame someone into naming the killer or forcing him into a confrontation. Charles Fuller adapted Zooman's script from his own stage play; he did the same for the film A Soldier's Story.

Destinee DeWalt
as Girl No. 15

There are no critic reviews yet for Zooman. Keep checking Rotten Tomatoes for updates!

There are no featured reviews for Zooman at this time.