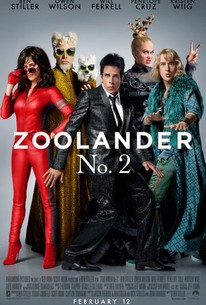 Critics Consensus: Zoolander No. 2 has more celebrity cameos than laughs -- and its meager handful of memorable gags outnumbers the few worthwhile ideas discernible in its scattershot rehash of a script.

Critics Consensus: Zoolander No. 2 has more celebrity cameos than laughs -- and its meager handful of memorable gags outnumbers the few worthwhile ideas discernible in its scattershot rehash of a script.

Critic Consensus: Zoolander No. 2 has more celebrity cameos than laughs -- and its meager handful of memorable gags outnumbers the few worthwhile ideas discernible in its scattershot rehash of a script.

Ben Stiller returns both in front of and behind the camera for Zoolander 2, a comedy that finds the beloved model Derek Zoolander (Stiller) and his rival-turned-partner Hansel (Owen Wilson) facing a threat to their continued success.

Will Ferrell
as Mugatu

Benedict Cumberbatch
as All

Justin Bieber
as as Himself

Macaulay Culkin
as as Himself

Billy Zane
as as Himself

Demi Lovato
as as Herself

Lenny Kravitz
as as Himself

Zoolander 2 takes pains to reference every successful gag you remember from the original, and then embellish them in painful-often offensive, almost always outdated-fashion.

The first film scored a few palpable hits, but the new one barely makes the effort, and the poise of a work like "Funny Face," which both mocked and fêted a devotion to couture, seems an impossible dream.

If you want to see this, see it addled. With a fashion crowd, if that's not an oxymoron. Or something.

There are some clever bits and the satire is at times scathing but, on the whole, moments of hilarity are like oases in a desert of tedium. When Zoolander 2 isn't funny, the silliness strains the viewer's patience.

While all comedies get refined in the editing room, this one feels like it was slapped together there, as Stiller - who also directed - searched for laughs.

How bad is Zoolander 2? It's Batman and Robin bad.

Directed by [Ben] Stiller, the work is serviceable but not outstanding, save for the film serving as a compact travelogue for Rome.

Zoolander 2 exists in its own fabricated world rather than acting as a satirical spin on the more absurd elements of our own.

ZOOLANDER 2 is a true stinker, the kind of unfunny, nap-inducing comedy likely to be a future Razzie nominee.

Stiller's script has some fun with the common sequel trap of repeating old plot points and jokes, but doesn't escape it entirely. It's a relief then that the jokes about the series' new target - hipsters - land as successfully as before.

Zoolander 2 made me laugh, so there you go.

There are a couple of genuine laughs, but the film fails to provide anything new and turns into a strange spy-type race to save the day and only proves to be underwhelming and forgettable overall.

Although not as funny as the original, "Zoolander 2" is hilarious. Great costumes and hair with some really fun characters (such as Kristen Wiig's character and "Don Atari"), there's a lot to appreciate (and laugh at) in this film. For instance, how can anyone resist laughing at a Neil de Grasse Tyson cameo declaring, "That's what I do. I'm Neil de Grasse Tyson, B-tch!"? The poor critical and audience reviews are not justified in my estimation. I would definitely recommend this film to anyone who enjoyed the first film, or anyone who just wants to see a silly film making fun of fashion, modeling and James Bond.

The long-awaited sequel openly embraces its stupidity like the original with the only difference being worst than the first. Zoolander 2 is a senseless story with obnoxious and ponderous humor that works somewhat with its cast, both old and new, and its over saturated cameos. 2/5

The original movie was clearly an overstretched, zany SNL skit...but with a lot of charm. It was a light-hearted, fluffy bit of light relief that was quite clever in its witty take-down of the glitzy celebrity/fashion world. At the centre of this ridiculously glossy ham fest was the dynamite duo of the blonde, hippy-esque, Hansel, and the brunette, Tom Cruise-esque, Derek Zoolander. Both vacant, narcissistic, world famous male models clashing head to head for the grand number one spot in the fashion universe. Oh as a side plot, the evil Mugatu was trying to use Zoolander in order to assassinate a world leader. So what has changed for this belated sequel? well not much frankly. The plot actually follows in the same steps as before with Zoolander once again quitting the modelling world and then once again being forced back into it, this time to gain custody of his son. At the same time, Hansel has done pretty much the same thing and is also dragged back into the modelling world after his orgy partners all turn up pregnant. Both are invited back to 'civilisation' by the mysterious Billy Zane who is apparently still looking for that big break back into Hollywood (just like the original). Oh and Mugatu is still up to his old tricks. I think the first thing that hit me was how lame the jokes were, I mean really seriously lame and forced. Within the first ten minutes of the film Billy Zane hands Zoolander his Netflix, [i]'whoa! Jack Ryan...and Jack Reacher! Tonight's gonna be a total jack-off'[/i]. Are you groaning? you must be, surely you must be! Remember now, within the first ten flippin' minutes! Anyway as you can imagine things don't really get any better than that for the rest of the run time. There are barely any moments that did make me actually smile, the main one being the death sequence of Justin Bieber which I'm sure came at the top of most people's list. Another was a quick quip from a news report at the start of the movie, where the reporter speaks about the 3.7 million high school graduates of 2016 not knowing what a fax machine was, and couldn't name a caucasian President. The only other oddly amusing things that stood out (stood out in the sense that they were mocking modern society) was Benedict Cumberbatch playing some weird, eyebrow-less, mono-sexual/pan-sexual...model person, who claims not to be confined by binary constructs and has married himself (mono-marriage, is that actually a thing?? really wouldn't surprise me). It was strangely realistic considering today's current trends, as was both Zoolander and Hansel hesitantly agreeing to it all, not liking labels and supporting it all etc...And then you had the character of Don Atari who was pretty much the face of modern youth I guess. You're not suppose to understand half of what he says because he speaks in this modern youth tongue that's kinda like speaking in reverse, whilst taking the piss out of everything 'old'. Highly annoying, I know that's the idea but nonetheless, highly annoying. The rest of the movie is completely stuffed with one big cameo after another as if you were watching some millionaires fanboy flick (I suppose you are). Zoolander has a son who of course turns out to be fat and ugly, whilst also resenting him for not being a good father. Mugatu once again has some evil, dastardly, Bond-esque scheme to...well I'm not sure really, kill all the leading people in the fashion industry I think it was. This involves kidnapping Zoolander's son under the guise of some ancient prophecy about the fountain of youth in order to lure all the bigwigs of fashion to one place...or whatever. And Hansel...doesn't really do anything except help out here and there or have breakdowns over his pregnant orgy family. Basically Hansel is replaced by Valentina Valencia played by Penelope Cruz in a stereotypically spoof Bond-esque role. Hell everything here is a stereotypical Bond spoof, its basically [i]Austin Powers[/i] with loads of cameos. Of course the movie isn't supposed to be remotely serious, its virtually a spoof, and in terms of hitting its targets...well I guess it does. The problem is none of this is funny anymore, apart from the odd lone gag its all terribly cliched, bloated, self-indulgent and cringeworthy. I mean come on! I've never seen so many cameos, but what for?? they don't add anything to the movie, they don't make it funnier or cooler, they just stick out as, at times, badly crowbarred in cameos. This movie [b]really[/b] did feel like a sketch that had been padded out tremendously, the only remaining plus points that spring to mind are the inclusion of Ariana Grande in a latex catsuit and hood, and Milla Jovovich looking hot as hell in her Dominatrix attire. So for mature and adolescent male boner fuel...full marks! For witty social commentary...half marks, everything else..dross.

A missed opportunity, Zoolander 2 squanders the use of its "new" cast, instead trying to ride on the coat tails of a largely forgotten movie. It's not so much that the story is stupid as it is simply poorly paced with the final acts rushing into what feels like an impromptu reveal through an excess of exposition. Too much screen time was wasted meandering in Derek and Hansel's self pity rather than setting up an elaborate plot that required a degree of foreshadow. Cameos become watered down from overuse and much of the humor simply does not feel as fresh or clever as the original. 15 years wasted waiting for what only appears to be a massive disappointment