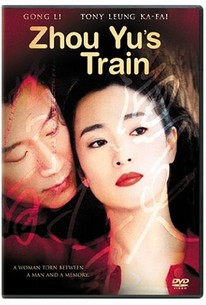 Critics Consensus: Despite some beautifully framed images, this mood piece, told in a fractured fashion, is confounding and, ultimately, unsatisfying.

Critics Consensus: Despite some beautifully framed images, this mood piece, told in a fractured fashion, is confounding and, ultimately, unsatisfying.

Critic Consensus: Despite some beautifully framed images, this mood piece, told in a fractured fashion, is confounding and, ultimately, unsatisfying.

Sun Zhou's stylized Zhou Yu de Huoche (Zhou Yu's Train) is the story of a woman in love. Zhou Yu (Gong Li) and teacher Chen Ching (Tony Leung Kar-Fai) fall in love. After Ching gives Zhou a poem he wrote for her, she begins taking a train ride twice a week to his home in order to have sex with him. During her time on the train, she strikes up a relationship with a veterinarian (Sun Honglei), but she ends their time together when she learns that he spied on her during one of her visits with Ching. Gong Li has a second role as a another woman obsessed with Chen who is trying to ascertain the nature of his relationship with Zhou. This film was shown out of competition at the Berlin Film Festival.

Huang Mo
as Zhou Yu, as a young girl

Beautiful to look at but aimless as a broken compass.

Zhou Yu's Train has its strengths, but it's clearly no bullet train.

This is one of those languid numbers where slow motion -- and there's lots of it -- is meant to signify poetry, and a line like 'I know my lake is artificial, but it's full of water' is supposed to seem lyrical.

The effort required at the end of Zhou Yu's Train to sort out exactly what just went down isn't worth the payoff.

One can quibble with the film here and there, and it takes a turn toward conventional sentiment at the end, but it's a pleasure to be able to describe a film as Hollywoodish and mean it as a compliment.

See Zhou Yu's Train for the interesting Chinese scenery, or see it to feast your eyes on the always beautiful Gong Li, but don't see it for the drama

A film that has considerably less on its mind than it thinks.

It just may be a movie that has difficulty transcending national borders.