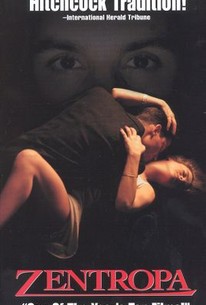 Europa (retitled Zentropa for the American release) is an hallucinatory Danish film set in postwar Germany. Jean-Marc Barr plays a young German who aspires for a job as a street conductor. But this is no mere "Joe Job;" Barr's adventures on the line are designed as a metaphor for the emergence of the "New Europe" following the war. Barbara Sukowa costars as the daughter of a railroad magnate--and possible Nazi sympathizer. Many of the special-effects sequences are computer enhanced, but even the "live" scenes have an unsettling, surreal quality to them (colors changing abruptly, backgrounds shifting without warning, etc.) This experimental film left some viewers confused, which may be why English-language prints of Zentropa are narrated by Max Von Sydow.

Lars von Trier
as The Jew

Baard Owe
as Man with Papers

Else Petersen
as Old Female Assistant
View All

The narrative is told in a deliberately disjointed style by the film's Danish director, Lars Von Trier, whose strength is in the film's astonishing visuals.

For all its devotion to directorial style, Europa is also impressive for the way it continually juggles narrative threads.

The highly stylized film keeps viewers at an emotional distance, but it establishes a consistent mood and a rhythm as steady as the click-clack of a train rolling along the track.

The German moral tragedy of the Nazi era is obscured by the movie's ostentatious arsenal of tricks and toys.

Surreal and confusing -- in all the right ways.

i am not the biggest fan of von trier but with the recent controversy at cannes i thought i'd give one of his older films a watch. this is just stunning. shot in an ironic film noir style with many interesting effects, it explores the plight of post-war europe through the adventures of a hapless american train conductor. i found the voice over a little overbearing at times (sorry, max von sydow) but then i read it was added later for english language prints. among many beautifully shot scenes, the one of snow falling in the cathedral took my breath away...

A delightfully messy, misanthropic throwback to glossy 40s international melodrama. Think Casablanca with a mean streak. His triptych of a discontinuous, failed Europe ends here, in a far more accessible way than the visions seen in The Element of Crime or Epidemic - it's only upon careful scrutiny that the film reveals itself as truly bizarre. Time and space seem completely immaterial, as trains move backward and events rewind in surprisingly subtle ways. Lars von Trier puts forth unusual insinuations, that Europe and Germany are dream spaces where nothing seems to make sense, a widespread extrapolation of the mere mechanical failure that plagues the continent in The Element of Crime. Here, EVERYTHING has failed, not the least of which is Leopold Kessler, a starry-eyed idealist thoroughly shit upon at every turn. Meant to be a commentary on the gendered notions of idealism, and the man's attempt to seize power and subsequent failure, it's sort of difficult to watch. Jean-Marc Barr's performance is a little ridiculous, but you sort of get the feeling that von Trier wants it to be. Europa seems serious, but it's too glib to be taken completely at face value. You always get the idea that it's got something more to say than what's sitting at the surface/narrative level, and that justifies its idiosyncrasies. Even divorced of critical or auteurial theory, this is a fun watch, probably the most accessible of von Trier's movies. Highly original, visually captivating and finely observed, Europa will probably alienate viewers who are observant but not creative; everyone else should enjoy themselves thoroughly.