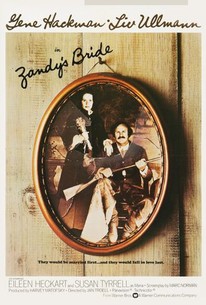 Based on Lillian Bos Ross' novel The Stranger and adapted by screenwriter Marc Norman 25 years before he would win the Best Original Screenplay Academy Award for 1999's Shakespeare in Love (along with Tom Stoppard), Zandy's Bride is a romantic Western starring (Gene Hackman) as gruff rural rancher Zandy Allan. Looking more for an extra hand around the ranch than a companion, Zandy sends for a mail-order bride from Sweden. Unfortunately for him, he doesn't get what he expected. When his bride, Hannah (Liv Ullmann), arrives she is anything but compliant, bearing a headstrong attitude that rubs Zandy the wrong way. Although he mistreats her at first, Zandy and Hannah fall in love as hardship hits and they must struggle together for their survival. Also starring Eileen Heckart and Harry Dean Stanton, Zandy's Bride was also released under the title For Better, For Worse.

Critic Reviews for Zandy's Bride (For Better, for Worse)

Liv Ullmann is saddled with a glum, grin-and-bear-it characterization that disregards her gently ingratiating charm.

Audience Reviews for Zandy's Bride (For Better, for Worse)

You gotta have patience to sit there & watch Zandy's Bride waiting for something to happen.If you can sit through it all, It's eventually a pretty good movie.I know a couple times I wanted to turn it off & watch something else but I'm glad I didn't