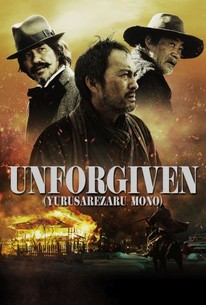 Ken Watanabe stars in this samurai spin on Clint Eastwood's Unforgiven chronicling an aging swordsman who is lured back into action to perform one final job. Lee Sang-Il directs, with Koichi Sato and Akira Emoto co-starring. ~ Jeremy Wheeler, Rovi

While Eastwood provided agonised, end-of-era minimalism as an ageing shooter forced to reload one final time to feed his children, the Japanese version leaps off into wild tangents and indulges in seeping wounds and spurting gore.

The film is remarkably faithful to Eastwood's version. It carries on a long tradition of exchange between Westerns and Japanese samurai films that stretches back to Kurosawa and Sergio Leone.

Clint Eastwood's 1992 western is adored by just about every critic in the world. Except me. Weirdly, I found Sang-il Lee's reverent remake gripping.

It's an enduring yarn, well told: a rare remake that functions independently, even as it reminds you - vividly, in places - of the original's elegiac pleasures.

Lee has made a film so good that it almost equals its namesake, that sour, magnificent western which won the Best Picture and Best Director Oscars in 1993.

Even at his most dogged and dutiful, Korean director Lee Sang-il crafts a retelling that never dips below a certain baseline of handsome competence, making a great case for the Hokkaido landscapes as a rugged frame for the action.

Lee's version offers enough grand spectacle and historical intrigue to carve its own space in the international multiplexes.

It's a curiosity, perhaps, but it's nicely made, beautifully acted and well worth seeking out.

There's no shortage of bloodshed, but rare is the film that uses bullets and flashing blades to provoke sadness rather than excitement.

The samurai/Western osmosis is given a terrific new surge by this beautiful-looking, smartly modified translation of the Eastwood classic.

Not as redundant as it sounds ...

Let's be explicit here - much, if not all of the pleasure of this version of Unforgiven is tied directly to the previous film. As a standalone project, it's highly interesting, but it's also hardly definitive.